The government collected more taxes than expected in the first 11 months of last year and more than its full-year 2018 goal.

According to the Ministry of Economy and Finance on Thursday, 279 trillion won ($249.3 billion) in taxes were paid between January and November, exceeding last year’s annual goal of 268.1 trillion won. The tax-collection rate, which compares total collected versus forecast collections, was 104.4 percent. 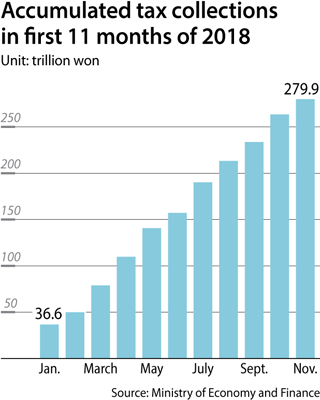 The government collected 28 trillion won more in 2018 through November compared with the same period a year earlier. In the first 11 months of 2017, the collection rate was 100.3 percent.

If the momentum continues, 20 trillion won more than targeted was likely collected by the end of 2018.

Taxes rose across the board.

The ministry said that active real estate transaction taxes had led until recently. But since the government slammed on the brakes in the sector, the real estate market contracted and contributed less than in the past. As a result, income taxes led in November.

But even the rise in income tax was not as impressive as it would seem, as much of the gain was a result of nominal increases.

As the government collected more taxes than expected, the Finance Ministry directed 4 trillion won towards the paying down of debt at the end of last year. It was the second time that the government paid down a deficit-covering bond since 2017, when 500 billion won was directed towards that purpose.