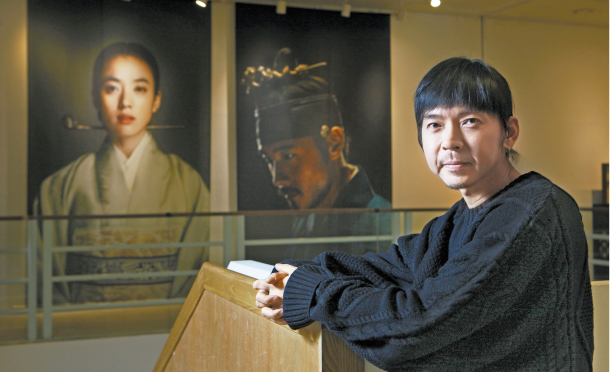 Makeup artist Cho Tae-hee opened an exhibition featuring the creations from his past works, which include “Masquerade” (2012) and “The Throne” (2014). [PARK SANG-MOON]

When people exit a movie theater after watching a film for a couple of hours, they usually talk about the actors and their acting, as well as the story and its ending. Hardly anyone brings up the issue of an actor’s makeup or their hair, and the decorative items they wear during their scene-stealing performances.

Makeup artist director Cho Tae-hee is well aware of how unnoticeable his efforts can be and this awareness is what makes him one of the best in the industry.

Starting in 2001 with the sensational romantic comedy feature “My Sassy Girl,” Cho has followed the same career path for almost two decades, receiving recognition for his work in a number of movies, such as the historical films “The Fortress” (2017), “The Throne” (2015) and “Masquerade” (2012), and comedy drama flicks like “Sunset in My Hometown” (2018) and “My Annoying Brother” (2016).

To show audiences the lesser-known parts of the filmmaking process, Cho has decided to open an exhibition where the makeup tools, hair decorations and concept drawings he worked on for films throughout his career are on display. Some of the notable items on display are a silver leaf-shaped hairpin and a dragon hairpin worn by actors Han Hyo-joo and Lee Byung-hun in “Masquerade,” different mustaches worn by Lee in “The Fortress” and the wigs that completed actors’ looks in films like “Rampant” (2018).

The exhibition extends across four floors in the Ara Art Center, central Seoul, and will run through April 23.

To discuss the exhibition and his career, the Korea JoongAng Daily met with Cho last week. The following are edited excerpts from the interview.

From left to right are phoenix hairpins worn by Han Ji-min in “The Fatal Encounter” (2014), a topknot piece worn by Song Kang-ho in “The Throne” (2014) and a dragon hairpin worn by Lee Byung-hun in “Masquerade” (2012). [HEAVENLY MAKE-UP]

Q. Depending on the style of an actor’s makeup, the character’s whole image and the feelings the viewers eventually get from the film can change. Though the role of makeup artists is crucial, not many people are fully aware of what they do. Can you explain your job?

A. The role of a makeup artist is to come up with an appropriate concept that fits the image of each character for their appearance in a movie, and help them transform to fit their roles through proper makeup, hairstyles and items used on their face and hair.

You said you prepared the exhibition over eight years. What does it mean to you?

When people watch a movie, their focus is on the story and actors’ performances. Makeup should not stand out to audiences. If it did, then I wouldn’t call the job a success. Good makeup shouldn’t shine, but should help actors stand out. Maybe because of this, not many people are aware of how actors physically transform into characters, so I hoped to share the backstory of how characters are created over the course of this exhibit.

The majority of people also consider makeup a simple [way of covering up] the face. However, there’s a lot more work involved than that. It takes at least two months to bring out a suitable concept for characters, and it requires many weeks and tremendous effort to create the necessary items. When making a topknot, for example, we measure the size of each actor’s head, and when making a curly mustache, we have to go through many steps, like boiling, braiding and microwaving it to yield the result we want. The fact that there are so many different types of mustaches different actors wear makes the work more challenging. I wanted to let people know about each of these procedures. 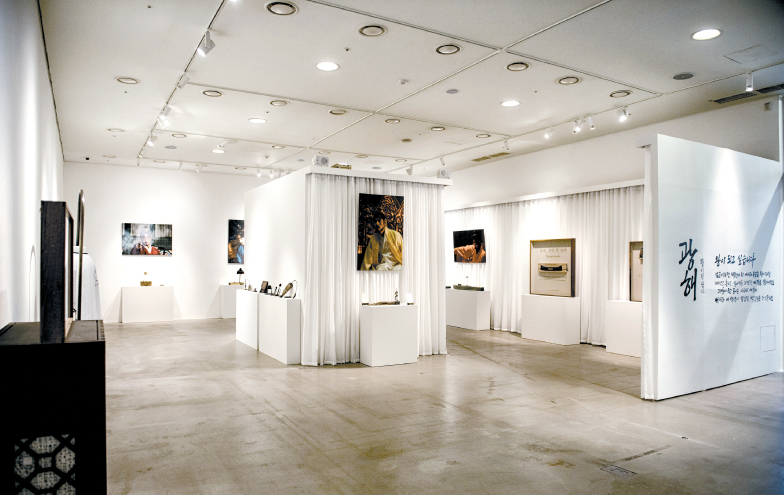 One of the four floors at Ara Art Center, central Seoul, where makeup art director Cho Tae-hee’s past works are on display. [HEAVENLY MAKE-UP]

What was your main focus for this display?

The exhibit’s biggest characteristic is that everything on display has been used for a movie. I want visitors to know how and in which scenes these items were used. I also want visitors to realize that something like a dragon hairpin is actually a part of the makeup.

The exhibit mostly revolves around historical titles like “Masquerade” and “Rampant.” What is the reason for that?

There’s a lot more to show for historical films because there are more techniques required for makeup. I don’t always do period pieces, but I do get a lot of offers, which I believe is due to [the success of] my previous works.

But, to be honest, I have a special affection for historical films. They’re a lot more challenging and demanding to work on than features set in modern times. But that is what makes them more charming and more memorable.

Maintaining the balance between historical facts and creativity when creating historical characters doesn’t seem easy. How do you keep the balance?

I have a lot of thoughts on that balance. If I fully follow the historical records, then every character in period pieces would look the same. There is zero creativity. I don’t think that’s fair to the audience. If I only follow the records, then it becomes more of a documentary than an actual film. Depending on how closely a movie follows historical records, I change my makeup styles. In “Masquerade,” for example, a lot of fictional elements were added. So I did the same for makeup. But “The Throne” mostly follows historical facts, so I did the same for makeup.

I actually received a number of complaints from professors for my work in “Masquerade.” They complained that the makeup was not true to the era, but I hope my works in those films are seen as creative.

The list of movies you’ve been a part of is long, but only a limited number of items are on display. How did you decide what to exhibit?

I chose the movies that have more to show and required more work. I took out films with simple concepts. In the period title “Warriors of the Dawn” (2017), for instance, the main actor Lee Jung-jae wears the same hanbok (traditional Korean dress) and hairstyle throughout the entire movie. Other films usually depict aging characters or changing seasons, but that wasn’t the case for that movie.

Are there any specific genres you avoid?

I avoid films with lots of skin-exposing or gory scenes. The working process of these two genres are personally very tormenting for me because to properly portray characters in these genres I have to watch a lot of similar movies. This is mentally stressful for me.

You have been in this field for almost two decades. How have makeup techniques changed?

The biggest change would be the quality of materials. Adhesive for mustaches, for example, used to be made from resin. It smelled bad and often caused inflammation. However, adhesives used today are odorless and don’t bother people’s skin.

While still limited, there are more strong female characters in films today compared to 20 years ago, like the characters in “The Villainess” (2017). Has this change been reflected in their makeup?

Though slow, an increasing number of female-centered movies are being released. I personally hope more movies centering on women will be released in theaters because there is a lot more to show with female characters, and, therefore, more variations to be seen.