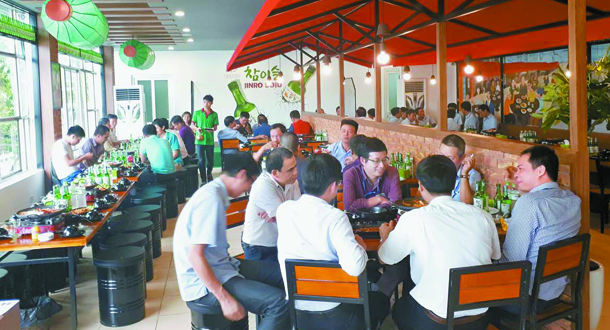 Soju is more popular than ever in Vietnam, with 8.54 million bottles flying off the shelves last year, a 32 percent increase from 2017.

Sales of the Korean drink have been boosted in recent years due to the popularity of K-pop and Korean dramas in the Southeast Asian country, as well as the recent success of the Vietnamese national football team led by Korean head coach Park Hang-seo.

Park has become a national hero in Vietnam. He was appointed head coach in September 2017 and just three months later he led the team to a historic run at the 2018 Asian Football Confederation (AFC) U-23 Championship in China, finishing runner-up. Park then led Vietnam’s U-23 team to another miraculous run at the 2018 Asian Games before leading the national team to victory at the Suzuki Cup in December.

Korea’s two top soju brands have capitalized on the popularity, establishing soju restaurants called Pojangmacha, a Korean word for a small food store, and even establishing local subsidiaries to rapidly profit from the trend.

Lotte Liquors, manufacturer of Chum Churum soju, opened the “K-pub” in Hanoi, Vietnam, at the end of last year. It sells such Korean street food as tteokbokki, spicy rice cakes, along with other Lotte beverages.

Vietnam takes up a significant portion of the Southeast Asian market when it comes to alcohol: the country makes up about 32 percent of the region’s alcohol sales.

Success in Vietnam is also important as it is seen as something of a regional trend setter, with 60 percent of the nearly 100 million citizens in their 30s.

Hite Jinro, manufacturer of Chamisul soju, opened a local subsidiary in Vietnam in March 2016. Hite Jinro has conducted sales activities to target soju not only to Koreans living in Vietnam, but also to Vietnamese locals.

Hite Jinro marketed soju as a mild liquor, an alternative to stronger drinks like whisky or rum, gaining huge success.

The Korean company also opened its own restaurant, Jinro Pojangmacha, in Hanoi in 2017 and is seeking to expand its business by creating more franchises.