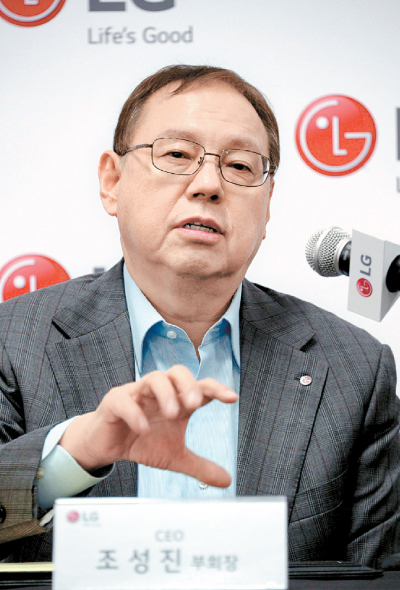 LG has been heavily investing in robots in recent years, pinpointing the sector as one of the future industries that will be the focus of its future development, along with artificial intelligence, autonomous vehicles, 5G network, big data and clouds.

“It’s too early to speak of break-even points as we’ve just started the business, but I’m thinking it will take about two years to reach that threshold,” said Jo during a press conference held in Las Vegas on the sidelines of the Consumer Electronics Show (CES).

Jo added that a lawnmower robot is currently being tested to be released at some point this year. The robot is already being used at the Konjiam Golf Club in Gwangju, Gyeonggi, he said.

He also unveiled a general plan to divide the robot business into five sections according to purpose: home, commercial and public, industrial, wearable and entertainment. While the company’s short-term focus is on commercial robots, the long-term goal will be developing robots that can be used at home.

“It’s difficult to bring change with small investments,” Jo said. “If we want to continuously develop this business, investments in advertising and marketing are necessary to create our brand even if it means there are some losses at the early stages.”

At this year’s CES, LG introduced a version of its CLOi SuitBot designed to be worn around the waist. The wearable robot adds strength to the waist when a user repeatedly bends down to pick things up. At last year’s event, a table-top version of the CLOi robot repeatedly failed to respond to the company’s marketing executive when it was unveiled on stage.

Over the past year, LG has continued to introduce different products, including a version of the CLOi SuitBot that supports the lower body. It has also teamed up with external companies like Naver and Emart to increase outcomes in the sector.

Jo once again expressed his intentions to continue partnering with other companies for tech development, whether by merging or investments.

“There haven’t been any concrete decisions made on which company to acquire, but we’re looking into about 50 or so candidates,” he said.

On LG’s mobile phone business, Jo made it clear that the company has no plan to stop making phones. LG’s smartphone business had been in the red for 14 consecutive quarters as of last year’s third quarter.

“If there’s no change in the form factor [or a smartphone’s hardware] from the consumer’s perspective, it’s inevitable that smartphone sales drop,” said Jo. “It has happened to us and other companies, too, only that it started a little earlier for us than others.”

He added that LG was going through reforms to internally prepare for next-generation smartphones.

“This is our second year [for internal reforms] and I think the rearrangements will go on until next year,” he said.