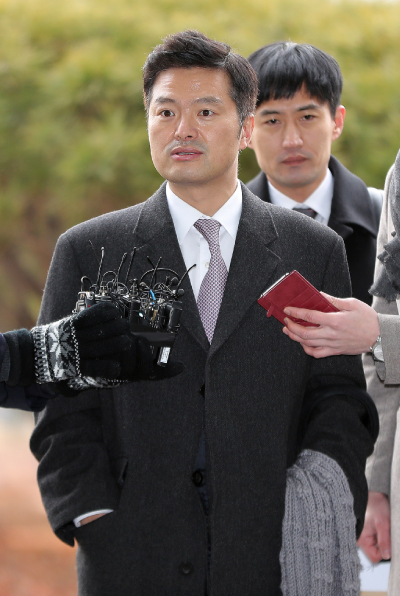 President Moon Jae-in in a press conference at the Blue House on Thursday denied any fault in either of the whistle-blowing scandals that have dogged the Blue House for weeks and backed his aides as they defend their cases.

It was the first time Moon mentioned the accusations. The Blue House is accused of ordering members of its special inspection bureau to spy on private citizens. It is also accused of having forced the Ministry of Finance and Economy in late 2017 to issue 4 trillion won ($3.6 billion) of deficit-covering bonds, despite the ministry’s objections, to make the former conservative Park Geun-hye administration’s fiscal governance look inept.

Both scandals were brought to light last month by different whistle-blowers. The first case revolves around Kim Tae-woo, a former member of the Blue House special inspection bureau, who leaked details about his time at the nation’s top office to the local press. He claimed he was fired by the bureau in mid-November for writing a report that accused Korean Ambassador to Russia Woo Yoon-keun of taking a 10 million won bribe in 2009 from a businessman, which the Blue House ignored when he raised the issue a year ago.

The second scandal was brought up by Shin Jae-min, 33, a former deputy director at the Finance Ministry. He made his allegations against the government and the Blue House on his personal YouTube channel over the last weekend of 2018. Less than a week afterward, he went missing for hours after dropping hints to a close friend that he was about to commit suicide. Police found him in a motel alive after he failed to hang himself.

Speaking to some 180 reporters from the domestic and foreign press on Thursday during the New Year’s press conference at the Blue House, Moon put the blame on Kim and Shin, but spoke more cautiously about Shin, apparently because he recently survived the botched suicide attempt.

Moon said he was relieved that Shin was safe and advised him not to “think too heavily” about the issue he raised. Shin’s accusations, Moon continued, were a result of Shin’s determination that there was a problem in the “narrow world” he was experiencing during the time he served in the Finance Ministry. Moon said that in reality, policy decisions are made in a more complicated process that Shin apparently didn’t know about. “The final decision lies with the president,” Moon said. “People elect a president to have them make a final decision.”

With Kim, Moon said the ongoing controversy revolves around Kim’s own performance at the Blue House and added any government official could “misuse their authority,” apparently pointing the finger at Kim. Moon implied that Kim’s surveillance of private citizens was based on his own decision, not orders handed down from his superiors in the Blue House.