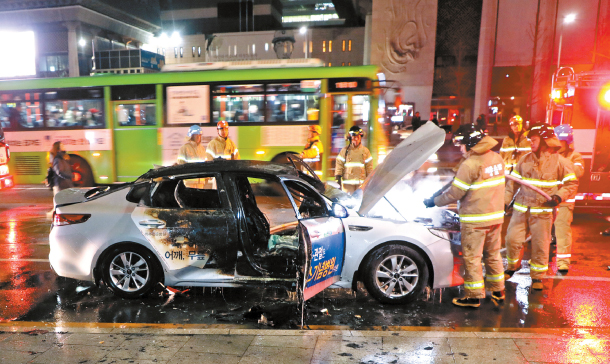 Firefighters put out a blaze at a taxi parked near Gwanghwamun Station, central Seoul, on Wednesday night. A taxi driver apparently started the blaze, which killed him, to protest Kakao’s planned carpooling service. [YONHAP]

A taxi driver died Thursday after he apparently set himself and his taxi on fire near Gwanghwamun Station, central Seoul, in a protest over Kakao’s planned carpooling service.

The fire on Wednesday evening was immediately reported to the local authorities by nearby witnesses. The taxi driver, surnamed Lim, was moved from the vehicle and rushed to a hospital to treat the severe burns on his body. He died while receiving treatment.

His death was similar to that of another cabbie who set himself ablaze in front of the National Assembly in Yeouido, western Seoul, last month for the same reason.

Police in charge of the investigation are treating the death as a suicide. They found flammable materials and a hand-written note inside the car. The writing was not legible because it was damaged by the fire.

However, police said they will investigate to confirm that Lim committed suicide and determine why he did so.

In the recording, Lim described how much stress he was under to make a living and how disappointed he was in the government, which he said refused to listen to people like him.

“I wonder if Kakao understands that the [implementation of its carpooling service] will kill taxi drivers that barely get by,” said Lim in the recording.

In response to Lim’s death, taxi union representatives held a press conference on Thursday in front of the National Assembly and said they would hold another large rally.

“We request to meet with President Moon Jae-in personally, as we can no longer expect that his administration and the ruling political party to solve our problems,” said one representative during the press conference.

Taxi union officials also requested that National Assembly members partially revise the Passenger Transport Service Act, under which carpooling services are currently legal. According to the officials, if their request is not accepted, then they will organize another large-scale rally, and said over 250,000 people will attend it.

This would be the fourth rally by taxi drivers against carpooling in recent months. Already, three protests were attended by thousands of taxi drivers, who called on the government to take measures to stop Kakao’s carpooling service from launching.

After the press conference ended, participants headed towards the Blue House to hand in their official written complaint and requests.

Kakao Mobility, who has since decided to delay the launch of its carpooling service due to objections from taxi drivers, has yet to issue an official statement on Lim’s death as of press time.