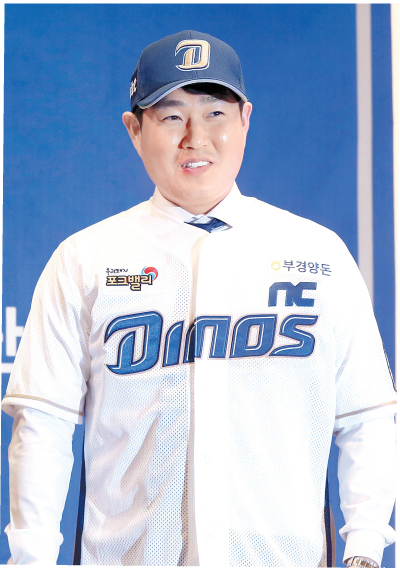 With a joining ceremony on Tuesday, Yang Eui-ji is now officially an NC Dinos player.

In December 2018, Yang signed a four-year contract with the Dinos at 12.5 billion won ($11.2 million), becoming the second-highest free agent player in the KBO. Yang is now the highest paid catcher ever to play in the KBO, easily exceeding Kang Min-ho of the Samsung Lions’ 8 billion won contract in 2017.

Yang joined the Doosan Bears in 2006 and became the club’s starting catcher in 2010, after fulfilling his military duty with the Police Baseball Team in the Futures League. With a batting average of .267 with 20 home runs and a great ability to lead the pitchers, Yang won the KBO’s Rookie of the Year award. In the 2015 and 2016 seasons, Yang led the Bears to two straight Korean Series titles, and in 2016, Yang was named MVP in the title series.

“I wanted a new challenge,” Yang said. “It’s a decision I made for personal development. With Doosan, we won twice and finished runner-up twice so I thought it was about time for a change.”

Although Yang will no longer wear the Bears jersey, he’ll keep his number, 25.

“Rather than my personal statistics, I’ll play for the goal of our team winning,” Yang said. “I want to play through 144 games and finish strong. I’m very thankful to the Changwon fans for welcoming me. At the new stadium, we’ll show the fans that we’re enjoying playing the games.”

For the first time since the Dinos debuted in the KBO, the club finished last in 2018. The normally strong pitchers struggled with injuries, and the absence of Kim Tae-gun, who is currently serving his military service, also undermined the club. To strengthen themselves, the Dinos made their biggest investment yet to sign Yang.

But it’s not only Yang that the Dinos splashed out on this year. Once the season ended, the club spent the maximum $1 million on all three of its new foreign players and finished building a new stadium, Changwon NC Park, for the upcoming season.

“We had the worst record last year,” said Hwang Soon-hyun, the Dinos president. “To repay the love Changwon and the fans have shown us, we decided to sign the league’s best catcher Yang Eui-ji. There’s a saying that baseball is all about the pitcher, but the catchers’ role is pretty big. A catcher’s ability determines whether a pitcher can perform at 100 percent or not.”

In addition to the president, the Dinos’ new manager Lee Dong-wook expressed his excitement with Yang.

“Since the time I heard that the club was going to sign Yang Eui-ji, I got excited,” Lee said. “I was waiting for my phone to ring. I’m more than happy to be with the best catcher. I can’t describe it in words.”

More than Yang continuing to be the best in the league, Lee is hoping that Yang will play through the season without any injuries. Then, Lee hopes that Yang will lead the Dinos’ struggling young team of pitchers.

“Since the NC Dinos were established, they have had young passionate players,” Yang said. “That looked really good. I did want to play for NC one day and I’m glad my dream came true.”

Although it’ll be Yang’s first year with the Dinos, he’ll have a familiar pitcher on the Dinos’ roster, Won Jong-hyun. Yang and Won played together while they were serving their military duty at the Police Baseball Team.

“Jong-hyun returned to the ground after a tough time [suffering from cancer],” Yang said. “I really want to catch Jong-hyun’s pitches.”

While Yang is excited to play with his former teammate again, he is also looking forward to working with new pitchers.

“Koo Chang-mo has great control,” Yang said. “By playing as a starter, he improved his game management. I’m also very excited about Jang Hyun-sik. Instead of me playing well, it’s more important for me to help the players throw their pitches. I’ll make all the NC pitchers throw whatever they want.”

Yang didn’t forget to thank his former club, the Bears.

“After I finalized my decision with NC, I called Doosan’s manager Kim Tae-hyung first,” Yang said. “He congratulated me. It’ll feel weird if I have to play against Yoo Hee-kwan.”

With Yang behind the plate, the Dinos have set high expectations in making their way back up to the Korean Series. But this year, the Bears may be the team Yang will have to play against rather than play for. In the 2016 Korean Series, the Bears played against the Dinos for the title.

“Doosan fans and the club loved me a lot,” Yang said. “Even if I meet Doosan, a game is a game. I want to lead NC to a victory and win MVP.”