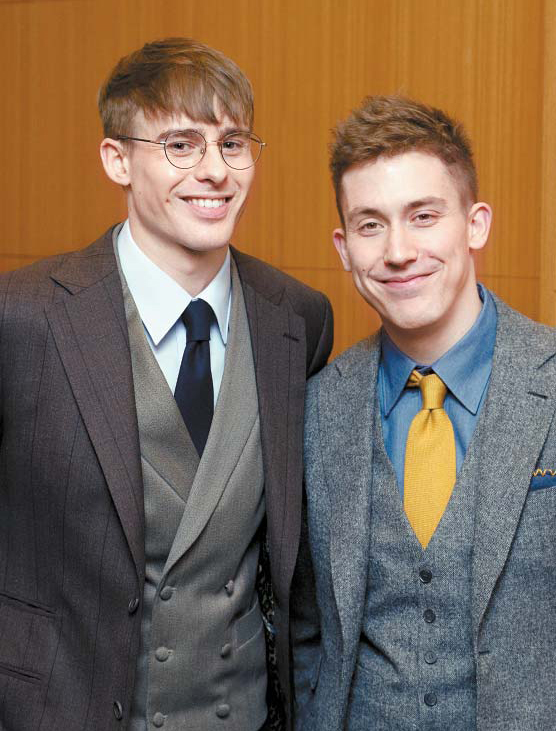 YouTubers Josh Carrott. left, and Ollie Kendal who run the channels “Korean Englishman” and “Jolly” attend the press conference on Thursday held at Coex, southern Seoul, ahead of the Korea Image Awards. [CICI]

Five years ago, YouTuber Josh Carrott never imagined that he would be an online celebrity. But with a YouTube channel that has over three million subscribers, the “Korean Englishman” has become a certified star in a country half a world away from his hometown.

Now the star of two YouTube channels, (he also runs “Jolly” with his friend Ollie Kendal) Carrott comfortably switches between English and Korean in his videos, which has made him especially popular among Korean fans. Most of his videos involve introducing Korean food and culture to friends and family in England to see their reactions to the unfamiliar dishes.

But the videos also add fun touches and challenges that appeal to viewers - one popular video features people on the streets of England trying extremely spicy Korean “fire noodles” for the very first time.

The two hosts know exactly what to do in order to extract funny reactions from their guests. The team is currently based in England but travels back and forth from Korea to England to shoot their videos.

Carrott also became popular for his interviews with top Hollywood stars from “The Avengers,” “Deadpool” and “Kingsman” during their visits to Korea.

Josh invites them to pojangmacha (Korean street food carts) and lets them try some of his favorite Korean foods while he interviews them. 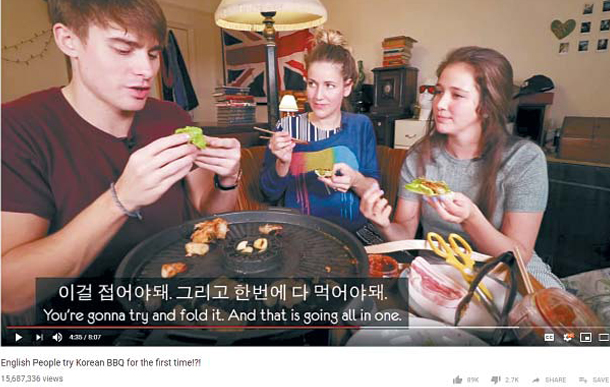 “[In the beginning,] we did not intend to film about food,” Carrott said during a press conference held before the ceremony. “But I naturally thought that the easiest way to bridge two different cultures was through food. So I started introducing food to my friends abroad - not just any food, but the food that I like the most. We are aiming to make content that can actually help viewers experience Korean culture.”

Although mukbang is a very popular genre on YouTube, Carrott is among the first people to introduce “friendlier” Korean foods, like Korean fried chicken or pork, to people abroad.

“In the beginning, I introduced food like bibimbap,” or rice mixed with vegetables, said Carrott. “But I realized that what I enjoyed the most was not actually bibimbap. I loved samgyeopsal [Korean pork belly] the most, and then fried chicken. Nobody hates samgyeopsal. I thought that I should probably introduce food that I really like to my English friends. So, I introduced them chimaek [the Korean slang term referring to the combination of chicken and beer]. This is also common abroad, but it’s a typical Korean culture, and the taste [of fried chicken here] is also very different.”

Although most of their videos involve food-related content, Carrott and Kendal hope to try new projects in the future.

“There are a lot of things we want to try,” Carrott continued. “We have a big whiteboard at home full of things that we want to try. There are six of us, and we don’t lack for ideas. We are just trying to make them happen. We filmed a video recently with a Korean celebrity where he introduces [some of the] things he likes about Korean culture to us. I’ve known about Korea for my whole life, but what’s great is that there are so many things I want to show [others] yet.”

He also added, “I’m not sure yet, but I wish to continue creating content that can link Korean and English cultures together. In the beginning, we had a more Korean audience, but now, we are becoming more international. We will make content that everybody can watch. That’s also one of the reasons why we started ‘Jolly.’ That channel is more experimental.”

According to Carrott, about 60 percent of the subscribers of “Korean Englishman” are Korean while the rest are from other parts of the world.

For “Jolly,” which is mostly in English, only 20 to 30 percent of the subscribers are from Korea. The rest are from United States, England, Australia and countries in Southeast Asia.

Carrott is married to Gabie Kook, a Korean chef born in Argentina and raised in Spain. She also runs her own YouTube channel.

“We met in LA,” said Carrott. “My wife and I met at KCON, [a Korean music festival]. She was asked to cater for VIP K-pop stars there. I was also sent to the event as the host since they needed an English speaker. My wife’s friend was a fan of our channel, and that friend had asked her to take a photo if she sees me. We met at backstage, and when I first saw her, I thought she was pretty and cute. We were also similar in the sense that we moved a lot since we were young. A day later, I thought that I wanted to marry her.”

A few days ago, “Korean Englishman” reached three million subscribers, and Carrott and Kendal are planning to make a video to celebrate.

“We were speechless [when we reached three million subscribers],” said Carrott. “Two million was very surprising, and we never imagined that we would reach three million this fast. We did not expect it, so we don’t know yet what video to make. But it will for sure be big.”

Thanks to the channel’s success, fans all around the world visit Korea to experience the country themselves.

“In the beginning, we thought, ‘Wow, people are watching our videos!’ Now, it’s just amazing to hear that people all the way from Brazil and the United States are visiting Korea after watching our videos. We are very happy, and we will work harder [to promote Korean culture abroad].”