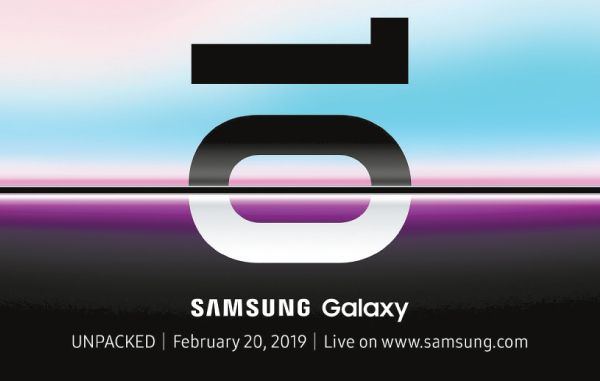 Samsung Electronics on Friday sent out invitations to its next unpacking event, where it is widely expected to unveil the next model in its Galaxy S smartphone series, the S10.

The event is taking place on Feb. 20 at 11 a.m. at the Bill Graham Civic Auditorium in San Francisco. Samsung noted that it will “unveil new devices that promise to usher in new Galaxy experiences based on 10 years of innovations” in a press release, without detailing what phones will be showcased.

The major question is whether the phone maker will unveil details of the foldable phone that it has been developing for the last few years. According to an article by the Wall Street Journal, the tech company plans to show a “fully functional foldable-screen handset” during the unpacking event. Samsung declined to confirm the claim.

There is a possibility that the model could be briefly shown, like at the Samsung Developer Conference in November last year. A proof-of-concept version of its foldable phone was briefly introduced on stage at the event. The phone is often referred to as the “Galaxy Fold” and “Galaxy F,” but the electronics giant has yet to confirm the actual name for the highly anticipated product.

Some leaders of Samsung’s mobile carrier partners said they have already seen the company’s foldable phones in closed door meetings at the Consumer Electronics Show that ended Friday.

SK Telecom CEO Park Jung-ho said during his press briefing at the electronics exhibition that “Samsung did not open up the foldable phone to general visitors, but showed the phone to me,” adding “the phone is in good shape.”

Park said the phone will be able to offer an improved media consumption experience.

LG U+ CEO Ha Hyun-hwoi also said he had seen two foldable phones during his visit to CES booths, though he did not say whether they were from Samsung. Ha said they come in “various shapes” and added that they seem to be “early stage phones that will enable customers to experience various video and gaming contents newly offered on the 5G network.”

Some other media reports, however, suggest Samsung may only show off three variants of its Galaxy S10 and hold off on its foldable phones until the Mobile World Congress (MWC) in Barcelona, which kicks off five days after the unboxing event.

The Korean electronics giant unveiled its latest Galaxy S series a day before the massive mobile trade show held in Spain, but this year’s event comes about a week earlier than usual.

It may be a move to put the spotlight on its S10 models for a few days before they get drowned out by stories about the foldable model they may intend to show off at MWC.

The unpacking event in San Francisco, where its rival Apple is based, is expected to attract 3,000 people from global companies and the media, according to Samsung. A localized unpacking event will also be held simultaneously in London.

Attracting global attention by coming up with an innovative design and feature upgrades is crucial for Samsung, which reported a sharp decline in earnings in the fourth quarter last year.

Its operating profit in the October-December quarter fell 28.71 percent on year to 10.8 trillion won ($9.6 billion), according to a tentative earnings report the company released earlier this month.