Former agriculture minister gets back to his roots

Former agriculture minister gets back to his roots 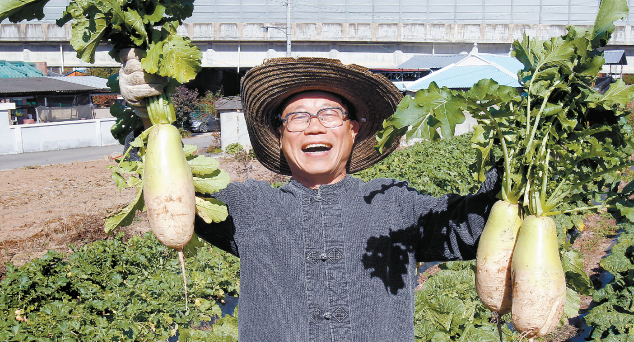 Lee Dong-phil, a former agriculture minister, who returned to his hometown as a farmer, started a new career as a local government official to help farmers in the area. [GONG JEONG-SIK]

Lee Dong-phil has a long résumé. After graduating from Yeungnam University in North Gyeongsang, he received his master’s degree and PhD at the University of Missouri. In the 1980s, he started his career as a researcher at the Korea Rural Economic Institute (KREI). In 2011, he was appointed head of the KREI and then head of the Ministry of Agriculture, Food and Rural Affairs in March of 2013.

The last line of his résumé, surprisingly, is not minister. Instead, his ever-growing experience has recently included time working as a level-five public servant for the North Gyeongsang Provincial Government. Lee, who retired to Uiseong County, North Gyeongsang, to become a farmer, gradually found himself becoming interested in an opening at the provincial office.

Soon afterwards, Lee applied for the civil servant position. After completing a test and interview, Lee was hired as a policy consultant for the agricultural business projects that the office administers.

His work only requires him to come to office three times a week for a total of 21 hours. When he’s not in the office, Lee spends his time as a farmer taking care of his crops. Lee says he gets up early to look after his crops at least twice a day while spending all three meals with his mother before going to bed early.

The JoongAng Ilbo interviewed Lee on his first day of work for the North Gyeongsang Provincial Government on Dec. 4. The following are excerpts from the interview.

Q. What do your colleagues call you once they realize that you were once agriculture minister?

A. I tell them not to worry about what title they should use with me. Titles are unimportant. I came here to help revive rural areas in Korea. The important thing is what I can contribute toward this goal. If they need a title by which to call me, I prefer “policy consultant.”

I applied for a public servant position last October after I heard that there was an opening at the North Gyeongsang Provincial Government. I turned in my résumé and was called in for an interview and test, just like any other applicant. The reason why I applied for the position was because I felt like it was the right position to be in to bring development to these rural regions. I was acquainted with Lee Cheol-woo, the governor of North Gyeongsang, during my time as minister, but I didn’t know him well personally.

What tasks are you responsible for at the provincial government?

I help with political projects that work toward reviving the agricultural business. In other words, I’m a policy consultant for projects that focus on agriculture. Let’s say that the provincial government is looking to go through with a smart farm plan or organize a model village that has facilities and businesses to attract the younger generation. Then my duty is to look over these projects and suggest additional details or directions that these plans can include for them to be more effective. I have experience as a minister and a farmer in addition to my knowledge as a researcher. I think I have enough credibility to say that things are going wrong if I feel like they’re going that way.

What were some of the experiences you had as a farmer?

The day after I resigned as minister, on Sept. 5, 2016, I moved to Uiseong County, North Gyeongsang — my hometown and the town where my mother currently resides. There I grew rice, garlic, sesame, onions and beans, and harvested and sold them in the local market. I grew my crops on 8,264 square meters (2 acres) of dry farmland and 1,322 square meters of wet farmland. My life as a farmer was tough and tiresome, especially when I realized that crops take considerable time and effort to grow, all of which amounted to nothing. Plus, there was rarely a market that opened where I could sell them.

The village I lived in had so many empty houses and the population mainly consisted of elderly folks. In other words, it felt like the whole village was dissolving into nothing. There weren’t even cultural facilities that citizens could enjoy. The agricultural village I experienced during my time as a farmer was so much different than the one I thought I knew during my time in the public office. I gradually realized that it was hard to revive rural areas as a farmer, which was why I decided to apply for public office again. I want to turn my hometown into a place worth living.

What was the first project you took on as a public servant at the provincial government?

I haven’t actually been asked for a consultation on a specific project just yet. However, I did visit an apple farm and a tofu factory in Andong, North Gyeongsang. I also often visit auction houses run by National Agricultural Cooperative Federation (Nonghyup) and factories. I figured that if the provincial government cooperates with Nonghyup, farmers will be able to negotiate reasonable prices for their crops. Once I figure out the exact operations that Nonghyup is in charge of, I plan to recommend that the provincial government work with them.

Some people are surprised that you decided to become a level-five public servant after your experience as a minister. What do you have to say to these people?

Should officials who were ministers do nothing [after resigning from office]? I feel like it will be worthwhile to help develop the rural farm villages in Korea, no matter what role I play to achieve such an objective. Agricultural society is all that I’ve studied and I feel that [working as a public servant] is my way of upholding my name’s reputation. No position is more important or less important.

Can we hear your resolution as, not a minister, but a public servant?

A minister and a public servant are both positions that work for the public. The former is responsible for general tasks, while the latter focuses on specific, yet detailed, plans. Overall, it’s just a matter of how each position tackles a single problem. Now, I’m a public servant who is paid by the government and works in my hometown. I promise to work toward making my village, among others, a better place in which to live.