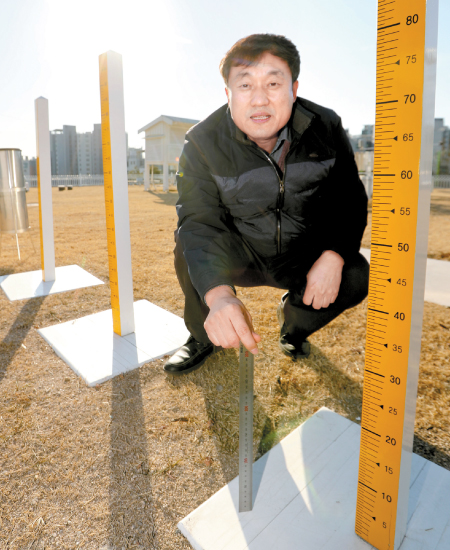 Kim In-sik, manager of the Seoul Weather Observatory, explains how to measure snowfall at an observatory in Songwol-dong, Jongno District, central Seoul, on Jan. 3. [KIM SANG-SEON]

With Korea experiencing this winter’s first snow on Nov. 24 last year and the Han River’s surface recently freezing over for the first time of the season, the country is now firmly in the depths of winter.

The observatory is now an official institute that forecasts and observes Seoul’s weather. The institute examines temperature, precipitation and the amount of snowfall, and these records eventually become Seoul’s official weather records.

Kim In-sik, the observatory’s manager, is a veteran who has been directing the weather observation service of the Korea Meteorological Administration for over 20 years. He worked as a forecaster at the South Pole until 2016 and came back to Korea last year to observe Seoul’s weather.

During his interview, Kim recalled an interesting event that happens every time the snow falls. Even though the equipment for recording weather is automated nowadays, it is still crucial to measure evidence with the naked eye.

But Kim has another important duty — observing the transition of Seoul’s four seasons. Kim and three other co-workers take shifts over a 24-hour period and observe all kinds of weather phenomena that indicate that seasons are changing.

In spring, Kim and his colleagues examine the flowering time of the pear tree, azalea and the Japanese apricot blossom located near the observatory. During the fall season, they hike Mount Bukhan to examine the maple leaves as they turn crimson and their colors peak. In winter, they generally look for the first snowfall or the first icicle. The sighting of the first butterfly, dragonflies and the sound of cicadas are also included in the list of things Kim and his colleagues observe.

Kim also has to check when the Han River first freezes each winter.

Q. How do you judge the first snow of the season?

A. The first snow usually falls during the night, so I usually look at the snow that’s fallen on a black blanket or a black glove to determine whether or not it’s snow. Hail is differentiated quite easily because unlike snow, it bounces off the surface of the ground.

You announced the first freeze of the Han River on Dec. 31. Walk us through the process.

We usually conclude that the Han River is frozen only when the space between the first pillar and the fourth pillar of the Hangang Bridge is 100 percent frozen. If the lowest temperature goes lower than minus 10 degrees Celsius (14 degrees Fahrenheit) for four days, there’s a high probability that the Han River will freeze. To make sure the Han River is completely frozen and that the conditions are fulfilled, I have to visit the site myself. So on Dec. 30, I went by the pier only to find that the river wasn’t completely frozen. I had to go again the next day.

How do you usually observe the transition of the seasons during spring and fall?

During the spring season I go to Yunjung Street in Yeouido to observe the blooming of cherry blossoms and their peaks. In fall, I often go to Mount Bukhan to observe the maple leaves. If 20 percent of maple leaves on the mountain turn crimson, that’s when I conclude that fall has finally come.

You also observe the advent of the season’s first butterfly and the cicadas’ first sound. Why is that?

Plants, insects and animals are the first ones to know the transition of a season. That’s why a close investigation of these living creatures is crucial. I used to also investigate the first frogs and snakes — but due to urbanization, I can’t do that anymore.

Kim emphasized that he and his colleagues are “always watching out for even the slightest difference around them to be the first to notice the transition of the season.”