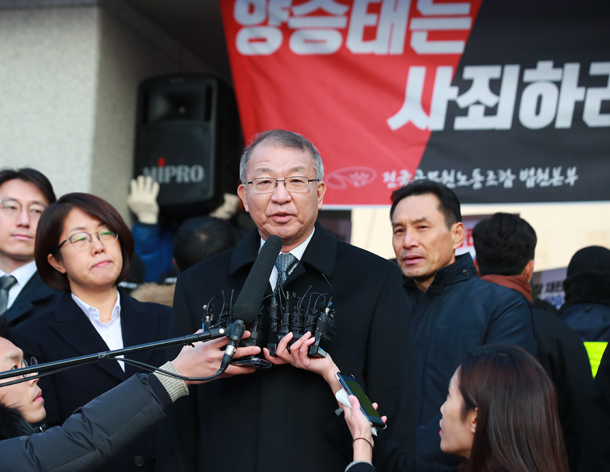 Yang Sung-tae, the former chief justice of the Supreme Court, speaks to reporters in front of the Supreme Court building in Seocho District, southern Seoul, on Friday before turning himself in to the prosecution for questioning as a criminal suspect. [YONHAP]

Before entering the Seoul Central District Prosecutors' Office in southern Seoul for the questioning, Yang held a brief press conference at 9 a.m. in front of the adjacent Supreme Court building where he served a full term as chief justice from 2011 to 2017.

“I feel sincere guilt for causing such a major concern to the people because of the events that happened under my term,” said Yang, his voice nearly drowned out by nearby protesters from a government workers' union. “All this is due to my lack of virtue, and I believe it is right that I take all responsibility.”

Yang cast himself as the defender of the judiciary, saying the judges under his direction never “in the least committed actions that went against the law and morality while performing their respective duties.”

Promising to answer the prosecution’s questions faithfully, Yang said he would fully explain “the parts that have been misunderstood.” This appeared to be a denial of the criminal allegations against him. Yang added that he hoped that the issue would be “illuminated from a perspective free from prejudice or preconceptions.”

The questioning, which began around 9:30 a.m. is expected to last into the evening after press time, though prosecutors have said it may not last as long as those of other high-profile figures like former Presidents Park Geun-hye or Lee Myung-bak.

Last year was a tumultuous one for the Korean judiciary. An internal judicial probe and a subsequent prosecutorial investigation unearthed evidence of massive abuse of power within the top levels of the judiciary under Yang, including alleged unconstitutional collusion with the Park Geun-hye administration.

Signs of misconduct within the judiciary were apparent early into Yang's term in 2012, when two judges were disqualified for reinstatement by the Supreme Court. Many other judges believed this was due to their outspoken stances against the then-ruling conservative Lee and Park administrations.

Rumors abounded over the next few years that the Supreme Court had created a blacklist of judges based on their political persuasions. A national meeting of 100 judges convened in June 2017 accused Yang of using the administrative body of the Supreme Court, the National Court Administration (NCA), to stall judicial reforms and draft a blacklist to crack down on dissenting voices within the judiciary.

An internal probe into the matter only kicked off after the leadership of the Supreme Court was handed over to Kim Myeong-su. The probe found multiple documents drafted by the NCA back in 2015 and 2016 containing evidence that the Supreme Court could have worked to limit the independence of judges, particularly those who were members of a liberal research group.

It also unearthed a series of reports that contained directives to curry favor with the Park Blue House.

“Regarding cases that may have strong national or societal influences, or are about sensitive political issues, communicate with the Blue House unofficially, and in advance, to make sure that the Supreme Court does not dole out unexpected rulings,” one report read.

Based on this evidence, as well as that uncovered by the prosecution's probe into the case that launched last June, Yang is accused of pulling strings within the judiciary to try to delay rulings or remand some to lower courts, depending on what the Blue House preferred. The most controversial allegation accuses Yang of delaying rulings in cases filed by Korean plaintiffs against Japanese companies that forced them into labor during World War II.

Park’s former chief of staff, Kim Ki-choon, told prosecutors in August that Park instructed her aides to persuade the judiciary to prevent the forced labor suits from going forward. Kim said he met with former Supreme Court Justice Park Byoung-dae, one of Yang's closest allies in the court, who Yang allegedly hoped would ultimately succeed him as chief justice, in October 2014 to discuss dealing with the trials as Park desired.

Prosecutors believe Yang also personally met with the lawyers of Kim & Chang, Korea's largest law firm, which represented the Japanese companies in the lawsuit. They allegedly discussed delaying the damage suits based on evidence from a raid on the law firm's offices last year.

Using the trials as bargaining chips, Yang allegedly wanted the Blue House’s support for his personal goal to set up a new court of appeals. This ultimately did not occur due to Kim Ki-choon's objections, according to records from the Blue House.

The NCA, under Yang’s leadership, is also believed to have drafted a document in February 2015 that suggested ruling in favor of Won Sei-hoon, a former intelligence chief on trial for spying during an election, as a “conciliatory gesture” toward the Blue House.

These allegations, as well as the recent revelation that Yang may have ordered judges to spy on the Constitutional Court during Park Geun-hye's impeachment trial and possibly relayed the information to the Blue House, if proven true, would constitute violations of the constitutional principle of separation of powers.

In his last press conference, which he held last June at a playground near his home, Yang denied having tampered with trials, which he called “pure and sacred.”

Given the plethora of evidence against the former chief justice – much of it gained from testimonies and documents from his former subordinates – Yang may be unable to escape indictment by the prosecution, which would also be a first.

This may be the reason, according to some analysts, why Yang decided to hold a press conference in front of the Supreme Court building instead of the prosecutors' office before his questioning. He may have been signaling to current members of the judiciary that he is one of their own and calling attention to his plight.