Copyright battle rocks traditional dance world: Debate rages over whether certain styles belong to artists or to the culture

Copyright battle rocks traditional dance world: Debate rages over whether certain styles belong to artists or to the culture 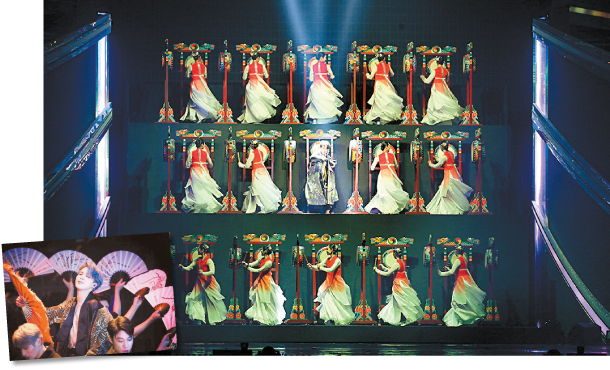 BTS showed off various traditional Korean dances in their own style at the 2018 Melon Music Awards on Dec. 1, including Samgomu, or a three-drum dance by J Hope, above, and fan dance known as buchaechum, by Jimin, left. [KAKAO]

The world of traditional Korean drum dance known as Samgomu and Ogomu (depending on how many drums are used) is currently in the throes of a fierce debate regarding its privatization. 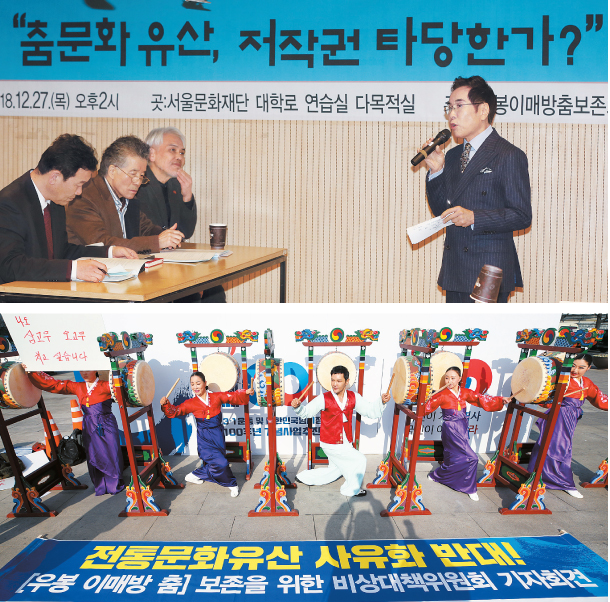 The Society for the Preservation of Ubong Lee Mae-bang’s Dances held a panel discussion on Dec. 27, top, and a street protest on Dec. 5, opposing the privatization of the country’s traditional intangible heritages, following the copyright registration of the drum dances known as Samgomu and Ogomu. [YONHAP]

Lee’s family then sent out documents to all of the dance organizations, institutions and schools in the country informing them that they were now restricted from practicing and performing the four dances. This angered a civic group made up of Lee’s students known as the Society for the Preservation Ubong Lee Mae-bang’s Dances, and they decided to rise up in protest.

The members of the society began taking action on Dec. 5 by posting a petition on the Blue House petition board, publicly opposing the “privatization of traditional intangible cultural heritage.” Then on Dec. 17, they held a press conference in Gwanghwamun Plaza in central Seoul, followed by a panel discussion on Dec. 27 at the Seoul Foundation for Arts and Culture in Dongdaemun District, central Seoul.

Upon such counteraction, Ubong’s family, using the name Ubong Lee Mae-bang Art Company, filed a civil complaint through The Sinmungo, a public complaint board operated by the Anti-Corruption and Civil Rights Commission, stating that the Society for the Preservation of Ubong Lee Mae-bang’s Dances is “spreading false information” and that it is an evident “defamation.” The government took notice of the dispute and on Dec. 18, the Ministry of Culture, Sports and Tourism and the Cultural Heritage Administration held an emergency meeting and decided that they would soon come up with a mediation plan.

Lee Hyuk-ryeol, Ubong’s son-in-law and the head of Ubong Lee Mae-bang Art Company, argues that the reason the organization registered copyrights for the dances was the “preservation of the original” and to make “clear recognition of the original creator” when Ubong’s dances are being taught and performed. However, the Society for the Preservation of Ubong Lee Mae-bang’s Dance claimed it was “the beginning of seeking profit.”

“We’ve never sought profit,” Lee claims, while the National Dance Company said they will “put the decision on hold until the country’s dance industry makes a decision on whether Ogumo is a tradition or a creation.” 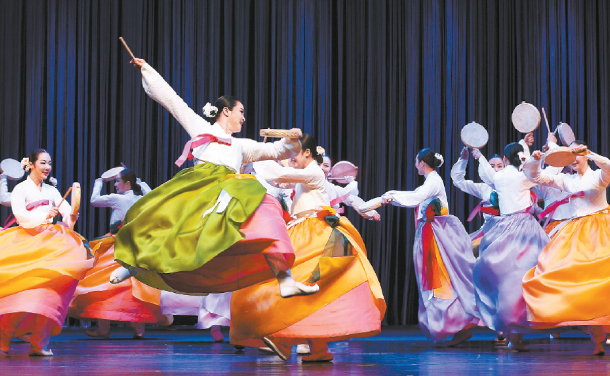 Sogochum, or small drum dance, is the country’s first traditional dance in which two different copyrights were registered. [YONHAP]

A tradition for the world to see

Although the controversy over privatization of traditional Korean drum dances began early last year, it really grabbed public attention when boy band BTS showed off their own versions of some of Korea’s traditional dances during the 2018 Melon Music Awards on Dec. 1.

The group’s performance began with J Hope doing the Samgomu, featuring him feverishly beating the drums, followed by Jimin’s performance of the fan dance known as Buchaechum. Then Jungkook brilliantly showed off a traditional Talchum, or mask dance, and a Bukcheong Sajanoreum, or a lion play.

This traditional Korean dance series was an opportunity of the world famous boy band to introduce Korean traditional dances to their fans all over the globe.

Moreover, traditional dances like Samgomu and Buchaechum are so widely known that they are almost always featured in large events like the Olympic Games or cultural exchanges involving Korea. Young Koreans learn the dances in elementary school and many even grow up to take it up as their career.

Piece of art or cultural heritage? 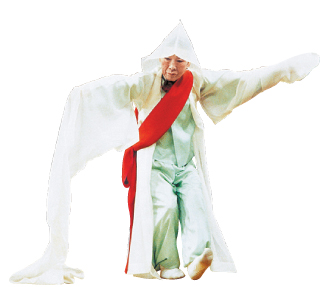 Korean dances like Samgomu and the fan dance are regarded as “modern versions of traditional dances” because they were created by modifying traditional dance moves with influences from foreign dances.

When the traditional fan dance created by Kim Baek-bong was registered as an intangible cultural asset of the South Pyongan Province in 2014, some people in the country’s dance community raised their voices questioning whether a “modern dance can be regarded a traditional Korean dance.” But majority of dancers judged that since the Cultural Properties Protection Law covers Korea’s modern history, modern dance can also be regarded as a “tradition.”

Samgomu and Ogomu are also considered to be modern versions of traditional dances. No one doubts that these drum dances are a reinterpreted group dance version of Korea’s traditional dance known as Seungmu (monk’s dance). But there is conflict over whether it is private or public property. Ubong’s family members use an interview Lee conducted in 1984 in which he states that he “created dancing with three drums after dancing Seungmu with just one drum” as evidence that the three-drum dance is indeed Ubong’s creation.

However, the Society for the Preservation of Ubong Lee Mae-bang’s Dance claim that the drum dance is the creative outcome of the joint work of the dancers at time who traveled with Ubong, stressing that Ubong’s family fails to present exactly when and where Ubong first came up with the dance. From the group’s side, they present as evidence a record that states that late female dancing star Im Chun-aeng had danced the three-drum dance in Changgyeongwon (currently Changgyeong Palace) before Ubong performed it, and testimonies from active dancers at the time, like Lee Heung-gu and Cho Young-sook, that “samgomu was already quite widespread in the 1950s ... before Ubong Lee Mae-bang.”

During the panel discussion on Dec. 27, Park Young-ae, a member of the National Dance Company argued that “the credit for transmitting and disseminating traditional folk dances, which includes Seungmu - Intangible Cultural Heritage No. 27 - and Salpurichum (Exorcism dance) - Intangible Cultural Heritage No. 97- through the mid- and late 20th century, goes to Ubong who is recognized as a holder of these dances.” But Park strongly denied that the same goes for the drum dances, insisting that Samgomu and Ogomu were created jointly by the dancers of the time.

Jang Oak-joo, a spokesperson for the Society for the Preservation of Ubong Lee Mae-bang’s Dance, also said that “unlike music and art, which get completed through the creative idea of an individual, traditional folk dance depends heavily on the community, or where it is happening that the time. Therefore it makes more sense to look at such an outcome as a joint collaboration rather than an individual creation.” Regarding the video clip that Ubong’s family presented as evidence, Jang said that it is not credible because the film was produced in 2017 after Ubong’s death by his daughter.

Lee from the Ubong Lee Mae-bang Art Company flatly refutes all opposing claims saying that Ubong already has copyrights for the two drum dances, which means that he’s already been acknowledged as a sole creator. However, Dean Hong Seung-gi of Inha Law School, an expert in copyright law, says having a copyright registration isn’t equivalent to having the rights.

“Copyright registration is effective only presumptively and that presumptive effect can be broken,” said Hong. “The copyright of a performance work becomes effective at the time of creation, hence the act of registration does not mean that the right is established. There are many countries that have no copyright system for performing arts, like the U.K., where the genre is the most developed.”

Experts nod to Hong’s comment saying that since the field of dance is not regarded in the performing arts world as an “industry” that produces goods for sale and makes profit, there wouldn’t be so much problems caused because there is no copyright system.

The country’s very first traditional dance to get a copyright is the “Choi Jong-sil-style Sogo Dance.” (Sogo is a small drum that can be held in your hand.) When sogo dance master Choi Jong-sil acquired a copyright of the dance in 2017, it made the dance’s co-creator Kim Myo-seon as well as many of her students unable to practice and perform the dance without Choi’s approval. So Kim made a move and also registered her style of Sogo dance - “Kim Myo-seon-style Sogo Dance” - and allowed anyone to perform her style.

“I officially stated in my copyright that anyone can perform my style of sogo dance freely without having to worry about paying copyrights,” said Kim. “I really, really hate dancers registering copyrights of traditional dance because it is the dance of our people.”

“If Choi decides to cancel the copyright, I will go cancel mine right away,” Kim added.

Kim also insists that “registering copyright of traditional dances contradicts with the country’s system of transmitting the tradition to the next generation at many schools and institutions.”

Currently, if a student wants to officially become the bearer of a traditional dance, the student has to pay a so-called work fee to a dance master. To become a “bearer,” it is generally known to cost the student around 50 to 60 million won.

“Before the country was introduced to the concept of copyright, almost everyone in the field of traditional dance paid such ‘work fees’ to their teachers and received lessons,” said Jang In-joo, a dance critic. “It is unfair for them to be limited to the dances now because of the copyright system.”