When people consider installment savings - a product requiring regular deposits over a predetermined period - they need to be committed and take it seriously.

Monthly minimums traditionally start at about 50,000 won ($44.80) and go as high as 1 million won, though the accounts pay higher rates than demand deposits or current accounts.

Many sign up for installment savings when they are putting money away for major purchases or events, such as a house or getting married.

The savings trend is evolving to be more inclusive and attract younger customers with less money. Major banks recently rolled out microsavings products, which allow users to deposit only several dollars a week.

The basic selling point can be best understood with the expression “many a little makes a mickle,” which means many small amounts accumulate to make a great sum.

To serve the younger consumers, banks are adding entertaining components to their services and designing them to be completely accessible via mobile devices. 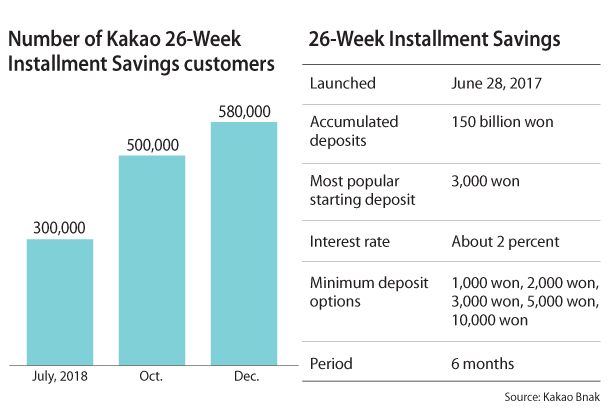 The accumulated principal will total 1.05 million by the end of the 26-week period.

A spokesperson at Kakao Bank said that the product was most popular with customers in their 20s and 30s account and the most popular initial deposit amount was 3,000 won.

The goals were often related to travel, dining and shopping. According to a survey by the bank, traveling was the top reason for savings. 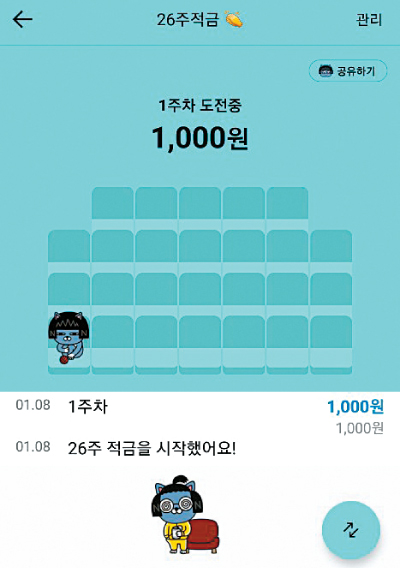 10 minutes to get started

A search of “26-Week Installment Savings” on Instagram yields more than 1,000 postings, most of which celebrate the completion of the savings program.

For existing Kakao Bank savings customers, the Kakao mobile-banking app lists savings and loan products on the side menu bar. With a tap of the 26-Week Installment Savings button, a registration pops up and leads the customer to the terms of contract page.

The terms explain that fake-name transactions are banned and review the Depositor Protection Act. Once the conditions are accepted, starting deposit amounts can be selected.

If the 1,000-won option is chosen, the amount increases by 1,000 won a week. The app then shows the value at maturity: 351,000 won and 1,422 won of interest before tax. The final step is to choose a savings account to be used for withdrawal as a challenge.

After tapping the next button, the final confirmation message appears, showing the beginning amount, the weekly withdrawal day, the maturation date and the interest rate.

Recently, the app showed an interest rate of 2.1 percent, slightly higher than the market. According to the Federation of Korean Banks, the average rate for a six-month installment savings is 1.7 percent.

In a test run conducted by a reporter, the entire sign-up process took about 10 minutes.

One interesting feature of the app is that Kakao characters are used to show the customer’s progress in meeting their savings goal. Whenever a deposit is made, an emoticon will be added.