Hwang Kyo-ahn, who served as prime minister in the Park Geun-hye administration, expressed his desire to join the main opposition Liberty Korea Party (LKP) and said he will consult with party members about when to come on board, a high-level LKP official said last Friday. 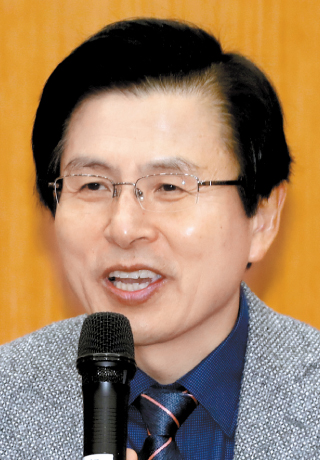 Rep. Kim Yong-tae, secretary general of the LKP, said Hwang met with Kim Byung-joon, the LKP’s interim party chief, Friday and told him he was interested in joining the conservative party. Yet Hwang didn’t mention anything about running for a leadership position in the upcoming LKP national convention, the secretary general continued.

Political analysts have been wondering whether Hwang, a strong ally of disgraced President Park, would join the LKP and try to run for chairman on Feb. 27 when the LKP elects its top echelons. Some LKP members believe the former prime minister could try to shore up intra-party support as chairman and use that backing for a bid in the next presidential election.

In polls asking about the 2022 presidential race, Hwang often enjoys strong support from conservative respondents, due mainly to his loyalty to the former president as many right-wing voters feel she was wrongly removed and jailed for power abuse and corruption.

An LKP official said on the condition of anonymity that it was Hwang who had asked LKP interim chief Kim to meet and that the gesture could cautiously be interpreted as Hwang wanting to run for LKP chairman next month. Another two-term lawmaker in the LKP said if Hwang runs for LKP chairman, the race would definitely have “more weight” because though he does not have much clout within the party, poll results show that he’s supported by the nation’s conservatives, which other party members can’t ignore.

Sources in the LKP say that at least eight people have expressed their interest in running for LKP chairman late next month, including five LKP lawmakers and three LKP members who aren’t lawmakers. The five LKP lawmakers who have talked about bids behind the scenes are Reps. Shim Jae-cheol, Chung Woo-taik, Joo Ho-young, Kim Jin-tae and Cho Kyoung-tae.

Those non-lawmakers who are likely to run are Oh Se-hoon - a former Seoul mayor who rejoined the LKP in late November after years of absence from politics following his resignation as mayor in 2011 - Kim Moon-soo - former governor of Gyeonggi - and Kim Tae-ho - former governor of South Gyeongsang.

If Hwang joins the LKP and runs for chairman, lawmakers from the Daegu, North Gyeongsang, and those who align themselves as pro-Park Geun-hye will likely unite to support him in the national convention, LKP sources say.

A second-term LKP lawmaker in the Seoul metropolitan area said if Hwang runs for chairman and pro-Park lawmakers back him, then other LKP lawmakers would probably come together to support one particular candidate as well, making it a competition between those who supported Park and those who didn’t.

But a pro-Park LKP lawmaker doubted that, saying Hwang was entering the race too late for him to build a strong support base.