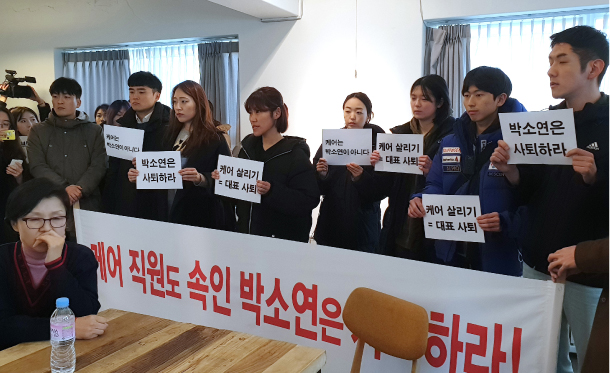 Workers for animal rights group Care stage a strike in their office in Jongno District, central Seoul, on Sunday to urge CEO Park So-youn to step down to take responsibility for secretly euthanizing about 230 animals the group rescued. They argued Park had deceived them about euthanizing animals. [YONHAP]

The founder of a well-known animal rights group in Korea is facing public scrutiny after a former employee told local media last Friday that the CEO personally ordered the euthanasia of at least 230 animals from 2015 to 2018 - due to a lack of space to shelter them.

The whistle-blowing instantly sparked anger from local pet lovers because Park So-youn, the CEO and founder of Care, had repeatedly said through social media that her organization doesn’t euthanize pets, a crucial factor for many who donated to the organization.

Care is known to have amassed some 1.9 billion won ($1.7 million) in donations from its 2002 launch through 2017, making it one of the biggest animal rights groups in the country.

The group grew especially popular in 2017 when President Moon Jae-in announced that he adopted a dog named Tori from Care.

In a statement last Friday, Care admitted to euthanizing some pets without saying how many, but explained it had no other choice because the animals were in “extreme situations.”

The group said it was overwhelmed with requests to save animals since 2015, when Care started to grow popular, and tried its best to save them.

But some had to be euthanized, the statement continued, because they were harming people or other animals due to their “severe combativeness.”

Some had contagious diseases or were in a state unable to recover due to serious injuries, it said. Other were unable to grow accustomed to Care shelters or were repeatedly affected by serious illnesses.

Care continued in its statement that in some cases, the organization tried to save the animals by paying “colossal medical fees.”

A unanimous agreement from members attending a Care meeting was required for an animal to be euthanized and the process was held in a veterinary hospital, the statement continued, denying the whistle-blower’s claim that Park unilaterally made the call whether to euthanize the animals.

The former Care employee, who said he used to work for the group’s animal care bureau, told the local newspaper Hankyoreh last Friday that the whole process for euthanizing animals was done “clandestinely” under Park’s order, and that Park’s main reason for killing animals was Care’s lack of space to store them at its shelters.

The whistle-blower said only about 10 percent of at least 230 animals killed from 2015 to 2018 had a serious illness.

An attorney from the Yulchon law firm who is representing the whistle-blower announced Sunday that she plans to ask prosecutors early this week to prosecute Park for fraud and animal abuse. The attorney said donors wouldn’t have donated to Care had they known Park euthanized animals.