Off the back of an impressive rookie season in the KBO, Kang Baek-ho is now the highest paid sophomore player in Korean baseball history. 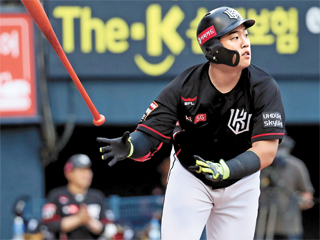 Kang Baek-ho of the KT Wiz watches his hit during a game against the Doosan Bears at Jamsil Baseball Stadium, southern Seoul, on June 14, 2018. [YONHAP]

Even before the 2018 season kicked off, Kang received a lot of attention. During his high school career, Kang showed his talent as all-around player, appearing as pitcher, catcher and designated hitter. In November 2015, Kang, who was in his first year in high school, became the first player to hit a home run at the Gocheok Sky Dome, which opened on Sept. 15, 2015.

Then, in 2017, Kang led Seoul High School to win the high school baseball championship and won the MVP award. Following his graduation, Kang was drafted first by the Wiz.

Once Kang turned pro, he focused solely on batting and switched his position to be a full-time outfielder, rather than a pitcher or a catcher. In 138 games in his rookie season, Kang had a .290 batting average with 29 home runs and 84 RBIs.

Kang’s reputation as an all-around good player lives on, and the Wiz’s new manager Lee Kang-chul said last week that he would consider letting him pitch in the coming season. Last season, Kang’s only time on the mound was during the All-Star Game, where his 150 kilometers per hour (93.2 miles per hour) pitches impressed the new skipper.

Kang was the first player to hit a home run in 2018. His 29 home runs last season were good enough to set a new record in home runs for a high school graduate rookie. His performance also assured him the KBO’s Rookie of the Year award.

Kang may have set the record in terms of price, but when it comes to percentage increase for a sophomore player, Ryu Hyun-jin, now of the Los Angeles Dodgers, still holds the record. Ryu’s contract jumped up by 400 percent when he entered his second season with the Hanwha Eagles. Ryu, who joined the Eagles in 2006, quickly became a dominant pitcher in the KBO, winning both Rookie of the Year and MVP.

“I’m thankful to the club for giving me better treatment,” Kang said. “I won’t be satisfied with my statistics and I’ll try my hardest to live up to the expectations of the fans and the club this season.”