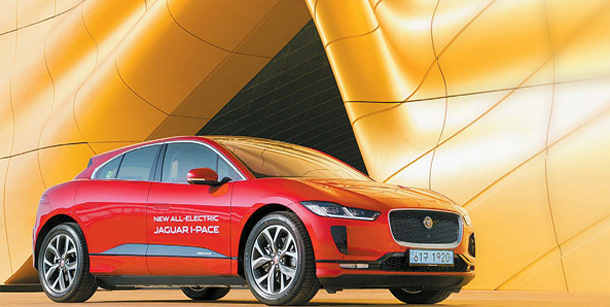 Luxury carmaker Jaguar introduced the I-Pace, its first electric vehicle (EV), to the Korean market Monday at the Paradise City hotel in Incheon, joining a growing number of EV automakers in the country.

The luxury brand’s all-electric sport-utility vehicle (SUV) sports an electric powertrain that produces up to 400 horsepower and a 333-kilometer (207-mile) driving range.

“The I-Pace is a high-performance electric car that has battery and electric motor technology developed from our experience in electric motor sports Formula E,” said Baek Jung-hyun, CEO of Jaguar Land Rover Korea. “Jaguar will lead the future of premium electric cars through the I-Pace.”

The vehicle, originally unveiled in the global market early last year, was delayed for launch in Korea due to the certification process, according to Jaguar Land Rover Korea.

The fast-charging stations can charge vehicles to up to 80 percent in just 40 minutes.

For maintenance, the carmaker promised to establish 10 new service centers so that there will be a total of 37 by the end of this year.

Jaguar Land Rover Korea is also promising an eight-year or 160,000-kilometer warranty for its battery system and will install home-charging systems for free for those customers who receive their vehicles by March 31 this year.