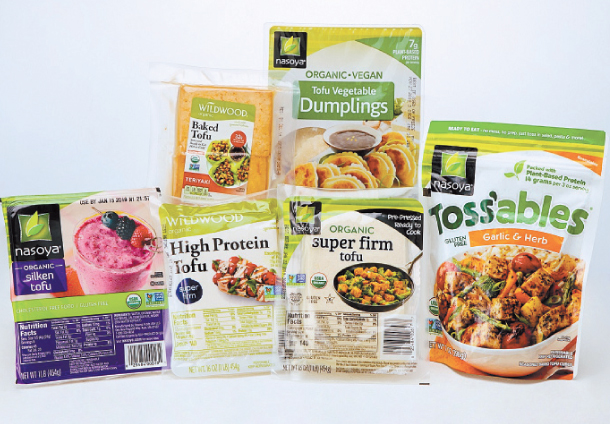 Pulmuone’s tofu business is growing in the United States, thanks to health concerns and more consumers looking for substitutes for meat.

Pulmuone’s tofu sales in the United States reached $88 million last year, 11.1 percent higher than in 2017. This pushed the company’s market share in the sector to 73.8 percent, solidifying its place as the No. 1 brand for tofu in the United States.

The company first started selling tofu in the United States in 1991 but the business took off in 2016, when Pulmuone took over American brand Nasoya, which was No. 1 in the market.

The company made investments and R&D efforts to customize its products to the American palate. Its research center in Los Angeles released 20 types of new products.

High Protein Tofu, which contains 1.8 times more protein than previous products, is one example. Its Super Firm Tofu is two to four times firmer than tofu sold in Korea.

Some of the R&D involved different flavors. Baked Tofu, for example, is cooked with a sauce to eliminate a specific smell familiar to Koreans but less well-known overseas.

There is also a product called Tossables, seasoned tofu cut in small pieces which can be used as toppings on dishes like salads.

In Korea, most tofu comes in single rectangular plastic packages filled with water to maintain a soft texture. Pulmuone’s U.S. products are vacuum-packed, seasoned and cut in smaller pieces so that customers can simply take out the tofu and prepare it quickly.

An increasing number of Americans are looking for the water-packed style of tofu as well. Annual sales of those tofu products in 2018 increased 10 percent year on year, according to Pulmuone. 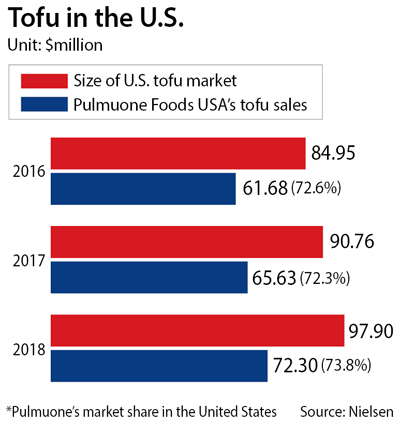 “While major markets in the United States have mostly sold ready-to-eat tofu because most Americans do not know how to cook it, sales of uncooked tofu have also increased over 10 percent,” said Park Jong-hee, manager of Pulmuone Foods USA.

Tofu is also being sold in different retail channels. When Pulmuone first started business in the United States in 1991, the main retail outlets were Asian or Korean supermarkets.

The customers were mostly Asians or Koreans living in the country.

However, sales in mainstream supermarkets now account for 80 percent of all tofu revenue in the country.

Pulmuone developed U.S. products to last four times longer than Korea’s distribution period of 14 days, taking into account the country’s size and the amount of time it takes for product to reach retailers from its factories.

“As we consistently conduct research and invest in the development and release of new products, we expect to raise our sales over 12.3 percent this year to exceed 100 billion won [$89 million],” said Cho Kil-soo, head of Pulmuone Foods USA.

Research data suggest that tofu has a lot of potential growth in the United States as an alternative to meat.

Research & Markets announced in a 2018 report that the global tofu market will continuously grow 4.05 percent on average every year until 2023.

It included Pulmuone as one of the main firms that will lead the global tofu market, along with the United States’ Hain Celestial and Japan’s Morinaga and House Foods.

Another research institute, Markets and Markets, estimated the size of the global tofu market at $2 billion in 2018 and predicted it will grow to as large as $2.7 billion by 2023.