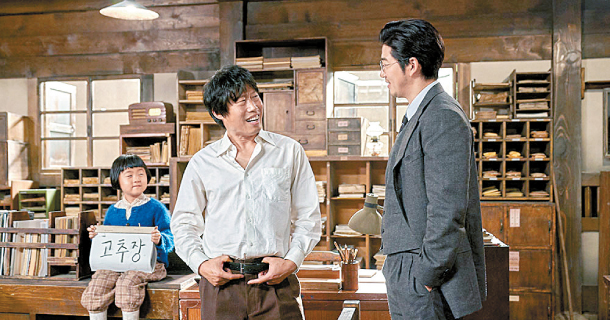 For the first time in 2019, a Korean title, “Mal_Mo_E: The Secret Mission,” topped the domestic box office over the weekend.

The period drama knocked Disney’s “Ralph Breaks the Internet” to third, while the second-place spot was taken by another new domestic release “Inside Me.”

“Mal_Mo_E” tells the story of a group of people who try to publish a hangul (Korean alphabet) dictionary against pressure from the Japanese military during Japan’s colonial rule over Korea (1910-45), and sold 785,000 tickets at 1,203 screens over three days, according to data provided by the Korean Film Council on Monday. The film accounted for 33.9 percent of the weekend ticket sales revenue.

The Lotte Entertainment film, which faced some criticism over its number of preview screenings prior to the official theatrical release date on Wednesday, has sold a total of 1.19 million tickets. The film stars Yoo Hae-jin and Yoon Kye-sang.

Coming in at second was the comedy “Inside Me.”

The body-swap tale, which stars Jinyoung, Park Sung-woong and Ra Mi-ran, sold 565,000 admissions at 1,041 screens. Since its release on Wednesday, the flick has sold a total of 770,000 admissions.

In the film, Jinyoung plays a bullied high school boy named Dong-hyeon, who falls off the top of a building and lands on middle-aged gangster named Pan-su (Park). Both survive - but they have swapped bodies. The film marks Jinyoung’s first major movie role.

The humorous “Ralph Breaks the Internet,” which debuted atop the box office last weekend, dropped two spots, with 316,000 tickets sold, putting its total sales to 1.34 million.

Local animation “Dino Mecard,” spun off from a popular television series, came in at fourth in its first weekend, with 231,000 tickets sold, while DC Comics’ underwater superhero title “Aquaman” rounded out the top five, selling 182,000 tickets. The film, starring Jason Momoa and directed by James Wan of “Saw,” has sold a total of 4.9 million tickets since its release on Dec. 19.

The sensational music title “Bohemian Rhapsody,” about British rock band Queen and its lead singer Freddie Mercury, managed to stay in the top 10. In its 11th weekend, the title finished the weekend in the sixth spot, with 84,000 tickets sold. The film’s total ticket sales now stand at 9.8 million as of Sunday. 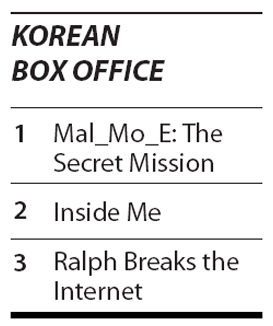 The action-packed title “Take Point,” about a mercenary force led by Ahab (Ha Jung-woo) on a covert CIA operation to apprehend a high-profile North Korean official in an underground bunker beneath the surface of the demilitarized zone, slid five spots to ninth. Since its release on Dec. 26, the big budget movie has sold merely 1.7 million tickets.

This week, theaters will fill up with animated films that target not just kids but also their parents. “Underdog,” about a pack of stray dogs striving to find freedom and self-identity, will arrive on Wednesday. The same day, Mamoru Hosoda’s coming-of-age title “Mirai,” which shows time travel through the eyes of a young boy, will also hit theaters.