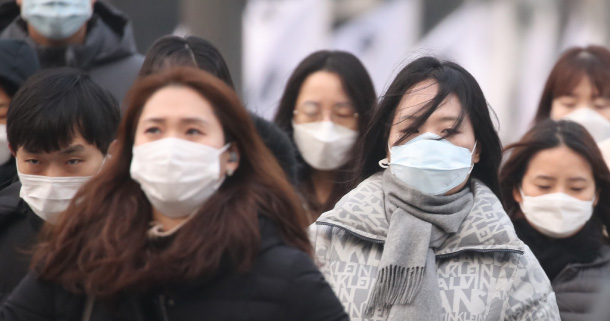 People wear masks as they walk in Gwanghwamun Square, central Seoul, as unhealthy levels of fine dust blanketed the Korea on Monday. The Seoul city government carried out emergency measures aimed at lowering the level of fine dust in the capital. [YONHAP]

As Korea’s fine dust reached toxic levels Monday, local governments throughout the country banned old diesel-fueled cars and some public officials’ vehicles from the road to help lift the thick smog that blanketed the country.

The WHO recommends exposure of no more than 25 micrograms of PM2.5 particles daily.

As fine dust particles in the air rose to dangerous levels through the weekend, the governments of Seoul, Incheon and Gyeonggi initiated emergency fine dust reduction measures from Sunday through today.

Of public officials at 906 government agencies in Gyeonggi, only those whose vehicle license plates ended in an even number could drive their cars on Monday. The others with odd-numbered license plates had to take public transportation to work.

The Gyeonggi provincial government also ordered its 39 factories and plants and 139 construction sites to reduce operation hours on Monday.

The provincial government also provided 12,500 free masks for passengers on buses in the morning. The government has set 1 billion won ($890,700) aside in its budget for this measure, which can be initiated three times a year.

The Seoul city government on Monday banned old diesel-fueled cars from entering the city from 6 a.m. to 9 p.m. Any diesel-fueled car registered in Seoul, Incheon or Gyeonggi before Dec. 31, 2005, that weighs more than 2.5 tons is not allowed in the city for the duration of the measure. The city government uses CCTV cameras installed on the roads to run license plates to detect any violators, who will be fined 100,000 won.

The last time this measure was initiated was on Nov. 7 last year. The city government said that it was able to stop 5,398 old diesel-fueled cars from entering the city on the day, which it said prevented 490 kilograms (0.5 tons) of fine dust particles from entering Seoul’s air.

The Seoul city government also banned the use of some 33,000 public vehicles on Monday.

The open-air ice skating rink in front of City Hall closed on Sunday due to unhealthy fine dust levels and remained closed on Monday.

The local governments of Busan and Gwangju also took similar measures to take vehicles off the road.