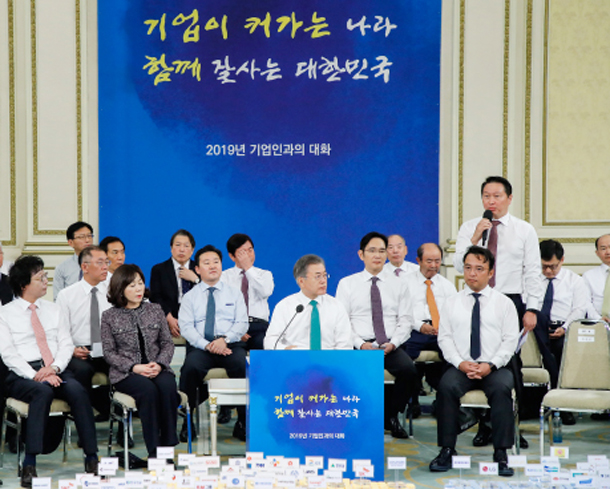 President Moon Jae-in invited 130 business leaders, including the heads of the country’s top 25 conglomerates, to the Blue House for a town hall-style meeting Tuesday.

And he got an earful.

KT Chairman Hwang Chang-gyu spoke up on the need to lift regulations limiting personal information use.

“President Moon asked me how 5G was going,” Hwang said. “5G is a technology that could bring about major changes not only to business but also to society overall.”

But regulations on personal information data could inhibit Korea from getting ahead, he said.

“In 2015, the Middle East respiratory syndrome (MERS) affected 200 or so people, but in 2018, we were able to control [a health scare] quickly as the government allowed KT to use individual’s roaming data,” Hwang said. “I hope the government would further ease [private information] regulation.”

These were two of the issues raised by heads of leading Korean businesses during the lively town hall meeting with Moon.

While this was Moon’s second invitation to heads of leading companies - the first was in July 2017 - it was the first time for Samsung’s Lee. During the beer-drinking event in July 2017, Lee was in jail awaiting trial on charges of bribing former President Park Geun-hye. He is now out of jail pending an appeal.

The meeting was also attended by 30 top government officials including Hong Nam-ki, the finance minister and deputy prime minister for the economy.

“Employment and investment are the foundations needed to assure corporate growth and future growth engines and a path to contributing to the nation’s growth and the public’s livelihoods at the same time,” President Moon said.

“Companies with more than 300 employees have good jobs that young people want the most,” the president added. “Creating good jobs is our economy’s biggest issue. While [conglomerates] have been doing well, I once again ask you to take an interest in job problems and lead in creating jobs.”

After the town hall meeting, Moon had a separate 25-minute meeting on the grounds of the Blue House with the heads of the top four conglomerates - Samsung, Hyundai Motor, SK and LG - as well as Seo Jung-jin, chairman of pharmaceutical company Celltrion, Hyundai Group Chairwoman Hyun Jeong-eun and KCCI Chairman Park Yong-maan.

According to the Blue House, Samsung’s Lee asked Moon to visit a Samsung plant or research center.

“I would go anytime when Samsung builds a plant or a research center with large-scale investment,” Moon said.