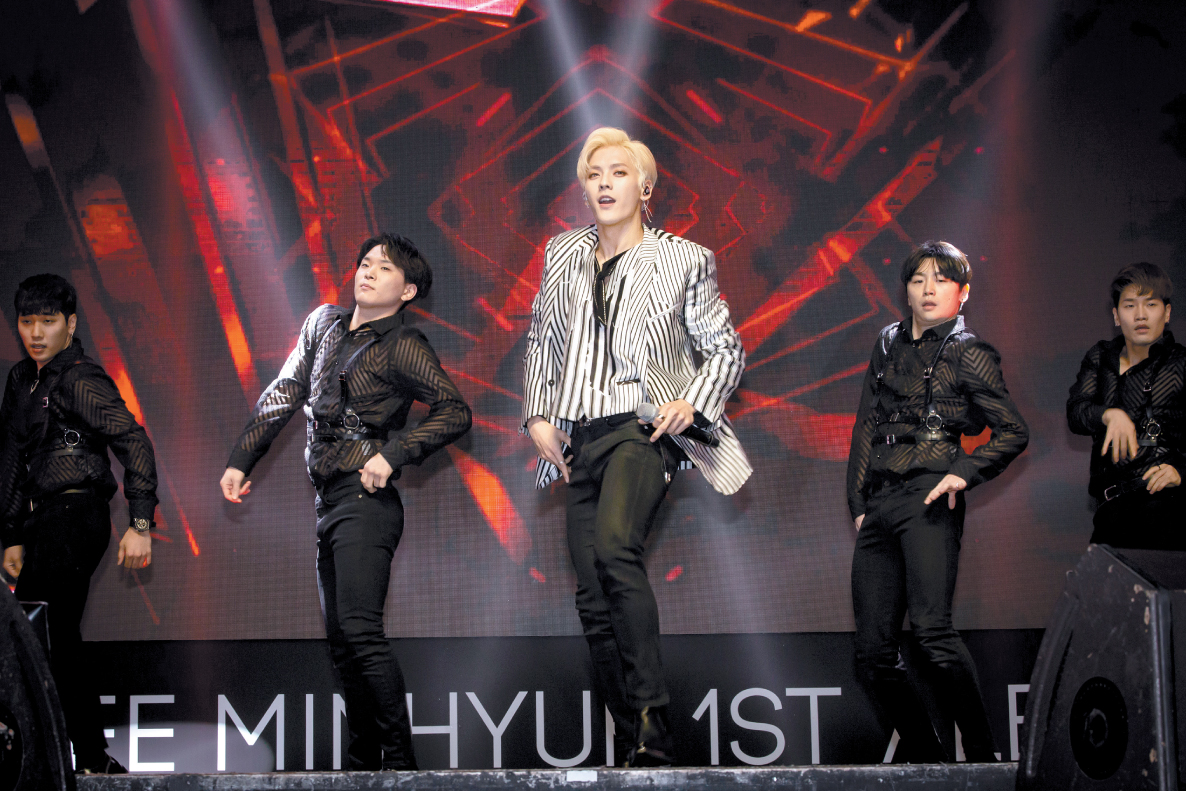 Lee Min-hyuk of boy band BtoB performs “YA,” the first single off of “Hutazone,” Tuesday at the Yes24 Live Hall, eastern Seoul, before his first solo album was released Tuesday evening. [CUBE ENTERTAINMENT]

As a solo artist, Lee is known as Huta, the singer-rapper’s stage name that he has frequently gone by when producing or being featured on songs outside of his work with BtoB. His 11-track album “Hutazone” shows off a powerful and tough side of the singer that he has not been able to flaunt as a part of his group. Performing “Hang Out” and the lead track “YA” for the first time for the local press, Lee signaled a promising start to his life as a solo artist.

“A lot of fans think of BtoB as a very friendly group and that I’m very soft,” said Lee. “But I wanted to show a side of myself that I haven’t been able to show to my fans before. So this time, I’ve brought a very powerful theme. I’ve even pierced my ears for the first time in my 30-year life.”

“Hang Out,” featuring Soyeon from girl group (G)I-DLE, is a disco track that energizes listeners with a strong and catchy beat and its somewhat retro choreography.

Each of the songs on the album, including “Hang Out” and the lead track “YA,” have been written and produced by the rapper while he has also participated in activities with his group. The album revolves around the theme of “Jekyll and Hyde,” highlighting both his kind and soft side that people are well aware of, and his new, tougher side.

The R&B track “YA” was created to show himself off as producer and performer, breaking out from the limits of being a BtoB rapper. Lee shows off his soft vocals and powerful rapping skills in addition to a choreography that’s easy for everyone to dance along to.

“This solo album wasn’t even something that I thought about,” said Lee.

“But my big brother told me that I was talented enough to do it. That’s what made me able to consider doing it, and my brother was really helpful in making it happen. It made me try so hard in so many ways, but at the end, I’m grateful that it’s out. And BtoB doesn’t dance much, but I sing and dance a lot on my album. I wanted to try a lot of different things on my own.”

“I hope you will all enjoy my world,” said Lee. “This feels like my second debut, and I feel so much more nervous standing here on my own without the other members of BtoB. But I’m glad that I’ve gotten to enjoy it and that I got through it well,” said Lee.

Lee will hold a solo concert series on Feb. 2 and 3 at the Yes24 Live Hall. “I’d be glad if after listening to the music and watching the music video, that the people who know me, especially my fans, think, ‘This is Lee Min-hyuk? He had this side of himself?’ I want to be known for being someone who is well-rounded, not just good at rapping, singing or dancing. I seriously don’t want to care about how well the song does, but I just want to enjoy my music together with my fans,” said Lee.