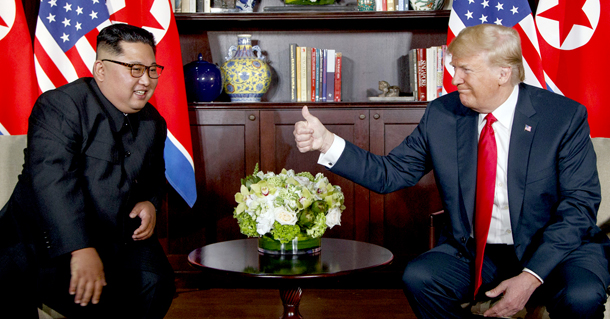 U.S. Secretary of State Mike Pompeo said that the security of the American people is the objective of the second North Korea-U.S. summit. The remarks not only made Korea nervous, but also Japan. It’s only natural for the United States to prioritize the safety of its own people, but it sounds like the reduction and abandonment of intercontinental ballistic missiles (ICBMs) — which threaten the U.S. mainland — come before denuclearization. If so, North Korea’s nuclear threats toward Seoul and Tokyo, which are within range of its Scud and Rodong missiles, could be pushed back in talks.

In an interview with Fox News on Jan. 11, Pompeo said, “We’re moving forward in these conversations, lots of ideas about how we might continue to decrease the risk to the American people … At the end, that’s the objective; it’s the security of American people.” He also said, “I don’t want to tell you exactly what our negotiating strategy is, but suffice it to say I think we have set the conditions where we can make real progress when Chairman Kim and President Trump meet and take down the threat to the United States and to the world that has been, you know frankly, holding the United States hostage for so long in North Korea.” North Korea can threaten the United States with its Hwasong 14 and 15 ICBMs, test launched successful lythree times in July and November 2017.

It is only natural that the focus of the North Korea-U.S. talks, which have been in a deadlock, should shift to ICBMs for the second Trump-Kim summit. The day after the June 12 Singapore summit last year, Trump tweeted, “President Obama said that North Korea was our biggest and most dangerous problem. No longer — sleep well tonight.” While he was referring to the ICBM threats, North Korea stopped at dismantling its missile engine test facility.

Since then, satellite pictures of North Korea show that missile manufacturing plants and long-range missile bases are in operation. Pompeo’s team once focused on partially taking out nuclear warheads and getting a nuclear list from North Korea, but Pyongyang’s refusal was confirmed. As Trump needs something to show off at home before the 2020 presidential election, ICBM reduction and abandonment could be tangible achievements.

If Washington and Pyongyang agree on ICBM abandonment in exchange for easing sanctions, it will be the biggest accomplishment in 26 years of U.S.-North talks. North Korea experts like Sue Mi Terry are concerned that Trump’s ICBM deal is not the beginning but the end of acknowledging North Korea as a nuclear state. Some are concerned Trump may offer to withdraw the U.S. forces in Korea. If the worst happens, how will the Korean government deal with the threat to “turn Seoul into a sea of fire” after leaving the nuclear issue to the United States and North Korea?