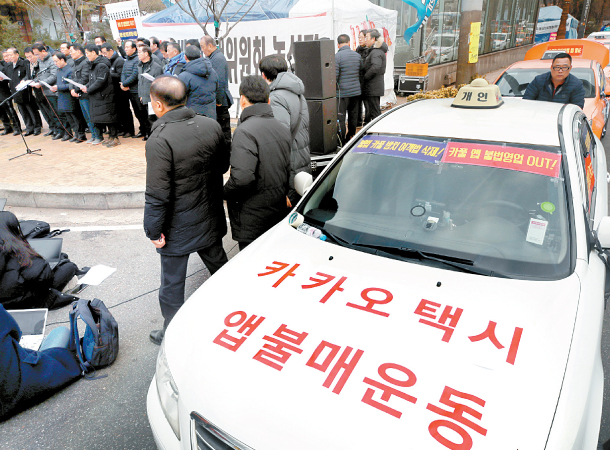 Kakao announced Tuesday that it will halt the test operation of its carpool service as a conciliatory gesture in an attempt to reboot talks with the local taxi industry.

The move comes a month after the company launched a beta service of its carpool platform on Dec. 7. Kakao Mobility, the affiliate in charge of all transportation services, made the decision to halt testing in a board of directors meeting, also on Tuesday.

“The decision was made in order to initiate discussions as we prioritize cooperation with the taxi industry and social consensus above others,” Kakao Mobility said in a statement released Tuesday afternoon.

The local taxi industry has been refusing to talk with Kakao over the last few months, repeatedly insisting that Kakao has to permanently halt its carpooling service before talks can resume.

“We will engage in conversations with no condition and with an attitude that nullifying the service’s launch may be an option,” Kakao added in the statement. “We promise to continue innovation in the transportation sector in collaboration with the taxi industry.”

The exact date that the service will be halted has not been confirmed.

“The matter was just decided today so we’ll need some time to inform our users and solve technological issues to stop the service on our app,” said a company spokesman.

This is the second time Kakao has changed its plans regarding its carpool service, which the company says it developed to help subsidize an undersupply of cabs during commuting hours and late at night.

Last month, the launch of the service, slated for Dec. 17, was indefinitely postponed a few days after a taxi driver burned himself to death in front of the National Assembly in opposition to the service. While a beta service was launched, it is only accessible to a limited pool of randomly selected users. The official launch was supposed to give access to everyone.

Last week, another taxi driver set himself on fire in Gwanghwamun Square in central Seoul. His suicide note also said that Kakao’s carpool service should be stopped.

The local taxi industry has been unmoving in its decision to avoid direct discussions with Kakao unless the carpool service is stopped for good.

Democratic Party lawmaker Jeon Hyun-heui, the leader of a government task force to find some kind of compromise on carpool services, held a press conference soon after Kakao’s announcement on Tuesday, telling the taxi industry that it is now time for them to respond.

“The taxi industry has been requesting the halt of Kakao’s carpool service as a condition to participate in talks,” she said. “We will wait for the industry’s response until this weekend … Next Monday, we will launch the joint discussion body to devise ways to improve the local taxi industry.”