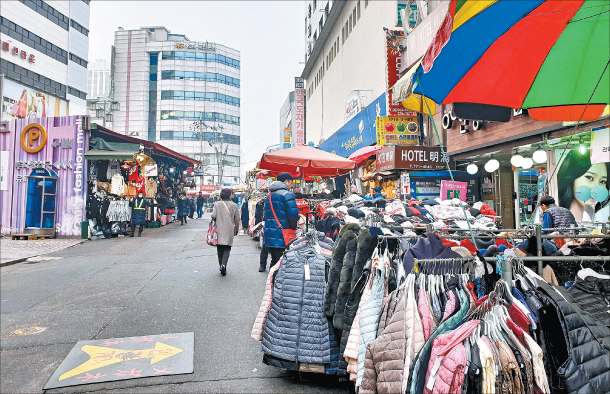 The streets of Namdaemun Market in central Seoul are deserted on Monday when the average level of fine-dust particles surpassed 130 micrograms per cubic meter, a record. [KWAK JAE-MIN]

Kim Jeong-heon spent his Monday morning wiping a fine layer of dust from the shoes in his store in Namdaemun Market, central Seoul. As the government sent out an emergency message warning people to stay indoors for the second day in a row, stores like Kim’s stood empty.

“Revenue has halved,” said Kim, who has been running the shoe store for more than 10 years. “The business was already difficult because the economy’s not great at the moment, but the fine dust has cleared people off the streets.”

The situation wasn’t much different at a nearby cosmetics store.

“The number of people on the market’s streets has halved,” said the store owner surnamed Suh. “We normally have customers come by until the evening, but yesterday it stopped much earlier. Other stores are closing down early as well because business is slow.”

The average amount of fine-dust particles measured on Monday surpassed 130 micrograms per cubic meter - the highest since the government started collecting such data in 2015. Although there is less than a month left before the Lunar New Year holidays, when traditional markets usually see a spark in sales, fine dust is keeping customers off the streets and driving them to indoor shopping malls rather than outdoor markets.

At Inwang Market in Seodaemun District, western Seoul, some stores opened for just a few hours or stayed shut for the whole day.

“Winter is typically an off-season, but the fine dust is driving customers away even more,” said a 61-year-old surnamed Han that sells fruits near the market. “Inflation and the poor customer sentiment were already a burden, but the fine dust is making things worse. I used to earn 50,000 won [$44.60] a day, but these days I make around 30,000 won. Sales were so slow that I’ve recently had to cut down on my meal costs.”

Street stalls also have to deal with the pollution.

“It’s difficult to make a living; I shouldn’t have come out at all today,” said Hong Kyung-ae, who sells fish-shaped buns from a stall near Hongje Station, western Seoul. “Fine dust hits hard and blows to food stalls like us and it’s understandable - even I wouldn’t want to eat food from street stalls when there is so many fine particles in the air.

“My daily revenue is around 10,000 won per day, but recently sales slumped to below 2,000 won,” she added. “I would rather collect paper boxes on the streets. That doesn’t cost anything, but when it comes to selling buns, left over dough has to be thrown out. I try to stay hopeful and force myself to work every morning, but by mid-day, my throat is sore.”

Another street stall that sells bundaegi, or boiled silkworm pupa, in Namdaemun Market said revenue over the weekend was extremely low.

“I received zero tourists from Sunday,” said the owner, adding that sales had dropped at least 30 percent after the arrival of the fine dust.

“Checking the weather report every morning has become a routine. When the fine dust level is high like today, I feel a strong urge to close for the day, but I eventually turn up anyway because I have no choice in order to make a living.”

Customers admit that they don’t want to expose themselves to outdoor markets or street stalls when the fine dust is especially bad.

“Even for a short walk outside, I feel my eyes itching and find it hard to breathe,” said office worker Choi Jin-young, “I wouldn’t dare consider going to a market. Nor do I want to eat street food when the sky is yellow. I’m trying to minimize the time spent outdoors and stay inside as much as possible.”

On the contrary, some retailers are enjoying a sudden surge in demand for masks thanks to the dusty atmosphere. At convenience store GS25, masks that block fine particles sold 260.5 percent more between Friday and Sunday compared to the previous week.