Sejong Center hopes to be a ‘safe place’ for all: In 2019, Korea’s arts hub looks to open its doors to more people

Sejong Center hopes to be a ‘safe place’ for all: In 2019, Korea’s arts hub looks to open its doors to more people

From left: Seoul Metropolitan Youth Traditional Music Ensemble’s “Spirits’ Homecoming-Unfinished Song” will be staged for the first time on Dec. 7; veteran trot (Korean country song) singer Lee Mi-ja will hold a concert on May 8 to 10 to celebrate the 60th anniversary of her debut; and the Seoul Metropolitan Dance Theater’s popular modern dance repertory “The Topping” will be staged on Dec. 5 to 7. [SEJONG CENTER FOR THE PERFORMING ARTS]

The Sejong Center for the Performing Arts has long stood as one of the landmarks of central Seoul. It was established in its current spot in 1978 to replace the Woonam Theater that was destroyed in a fire in 1972 after serving as the cultural hub of Seoul for 11 years. Under the operation of the Seoul Metropolitan City, the Sejong Center for the Performing Arts has been the symbolic heart of Korean culture for the past 40 years, providing artists and performing arts groups space to premiere their latest works.

But the center’s new CEO, Kim Sung-kyu, who was appointed last September, says that Sejong should now aim higher and become the “querencia,” a Spanish word meaning “a safe place,” for Seoulites - a place they visit not only for performances, but where they can relax and enjoy the city. Kim held his first press conference last week and announced what he hopes to achieve, while serving as the center’s head.

“What I mean by ‘querencia’ is that the Sejong Center for the Performing Arts should not merely be an art house that stages quality work, but it should also be a place that provides emotional safety for all its visitors.”

This is why Kim said one of the first things he did after being inaugurated was establishing a task force team to make the venue a barrier-free zone for the disabled by next year. The team, according to Kim, has already found 70 areas that need improvements and came up with plans to get rid of at least 58 barriers within the next year.

“We’ll install ramps and get rid of unnecessary steps throughout the venue so that people in wheelchairs can also make full use of the Sejong Performing Arts Center without any limitations,” Kim said.

Moreover, Kim pointed out that the courtyard atop the steps in front of the center is a “dead zone” and says he plans to give the space a makeover so that people can sit and relax in the area. 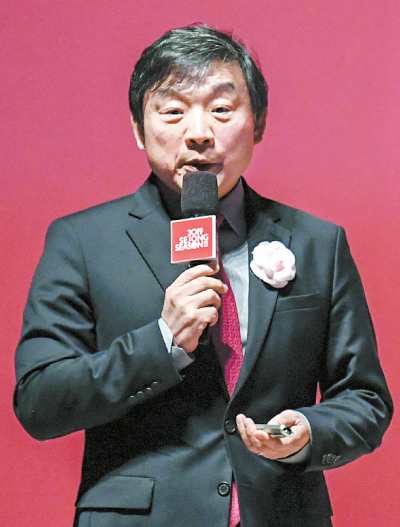 The Sejong Center of the Performing Arts’ newly appointed CEO Kim Sung-kyu speaks during his first press conference on Jan. 9. [SEJONG CENTER FOR THE PERFORMING ARTS]

“It’s such a large area that doesn’t really get used except for people using it to go through to the other side of the building,” Kim added. “The center hopes to turn this place into an area where people can drop by to relax and feel at peace.”

Kim also emphasized that the center has a bountiful lineup for this year’s 2019 Sejong Season to “not lose its original purpose to serve as an art house,” and will “offer great package deals to help people enjoy culture without much of a financial burden.”

Some of this year’s highlights at the Sejong Center for the Performing Arts include the “Yu Gwan-soon Opera Cantata” which will be staged on March 2 to mark the 100th anniversary of the March 1st Independence Movement and the establishment of the provisional government of the Republic of Korea.

The Seoul Metropolitan Chorus will present the opera cantata to shed light on the painful history of Korea through various patriots like Yu Gwan-soon. The concert starts at 5 p.m. at the Grand Theater and tickets range from 10,000 won ($8.90) to 50,000 won.

This year also marks veteran trot (Korean country music) singer Lee Mi-ja’s 60th anniversary as a performer. Her concert series will be staged from May 8 to 10, around Parent’s Day. Lee made her debut in 1959 with the song titled “Pure 19” and led the golden age of trot.

In fact, in 1989 at a show to mark the 30th anniversary of her debut, Lee was the first pop singer to perform at the Sejong Center. Since then, she has performed at Sejong every five years, but the center said this will probably be the 78-year-old singer’s last concert at the center. The concerts start at 7:30 p.m. on all three days and tickets range from 70,000 won to 200,000 won.

Ballerina Kim Joo-won will get rid of her pointe shoes and show off her tango skills from July 11 to 14 at Sejong’s S Theater. The former principal dancer of the Korea National Ballet, Kim has been choreographing contemporary pieces to show off another side of her dancing capabilities. Tickets range from 30,000 won to 50,000 won.

In September, the renowned Staatskapelle Dresden will visit Korea for a concert under the baton of Korean maestro Chung Myung-whun and accompanied by pianist Kim Sun-wook. The show is the orchestra’s first visit to Korea in four years. The concert starts at 8 p.m. and tickets range from 50,000 won to 200,000 won.

This year marks the 30th anniversary of diplomatic ties between Korea and Hungary, and the Sejong Center for the Performing Arts is taking part in the celebration. On Oct. 18 at the Grand Theater, there will be a “Night of Hungarian Music,” introducing the beautiful music and culture of Hungary. According to the center, Hungarian music is characterized by Gypsy music and the country also has produced many international musicians including Liszt, Erkel, Bartok and Kodaly. The concert will present the works of these great Hugarian composers. The concert starts at 7:30 p.m. and tickets range from 50,000 won to 110,000 won.

For Christmas, a unique classical music concert “Merry CATrismas & Happy Dog Year” will be staged from Dec. 24 to 29 for families to enjoy. Works about dogs and cats across genres will be presented to allow audiences celebrate their furry friends at the year’s end. Unfortunately, the four-legged companions will not be allowed in to enjoy the performance.

The Seoul Metropolitan Dance Theater’s popular modern dance show “The Topping” will also be staged in December. The show is popular for being a “participatory performance” which requires the audience to join the performers on stage and dance. The show will be staged from Dec. 5 to 7 at the S Theater and tickets are priced at 20,000 won.

On Dec. 7, the Seoul Metropolitan Youth Traditional Music Ensemble will stage “Spirits’ Homecoming, Unfinished Song” for the first time. This performance is a stage version of director Jo Jung-rae’s film “Spirits’ Homecoming” (2016), shedding light on Kang Il-chul who was forced to work as a comfort woman by the Japanese military. The concert starts at 5 p.m. and tickets range from 30,000 won to 40,000 won.

As for package deals, there are two types available this year: the “My Way Package” and the “Theme Package.”

Meanwhile, the “Theme Package” offers four to five performances categorized under different themes. For example, those who get their energy seeing live performances can get the “Querencia Package,” which includes “five works that will heal your soul,” such as the opera “Werther,” the “Harry Potter and the Philosopher’s Stone” film concert, an orchestra concert by the Staatskapelle Dresden, the musical “Excalibur” and a “The Great Composer Series II Bruckner” classical music concert.

Those with kids can select the “Kids Package,” which includes “Disney in Concert,” “Beethoven’s Secret Note,” the musical “Annie” and “The Tempest,” which children five and over can enjoy.

Because the center opened the S Theater last year, it also created the “S Theater Package,” offering five performances that will be staged at the new theater this year, including “Rupadaejeon,” “Contemporary S Kim Joo-won’s Tango Ballet,” “The Fishman,” “The Topping” and “Merry CATristmas & Happy Dog Year.”

Ticket packages go on sale beginning tomorrow at 2 p.m., and will be available for 43 days only. They can be purchased at the center’s website www.sejongpac.or.kr or by calling (02) 399-1000.

Individual tickets for the upcoming performances and exhibitions will go on sale on Jan. 31.