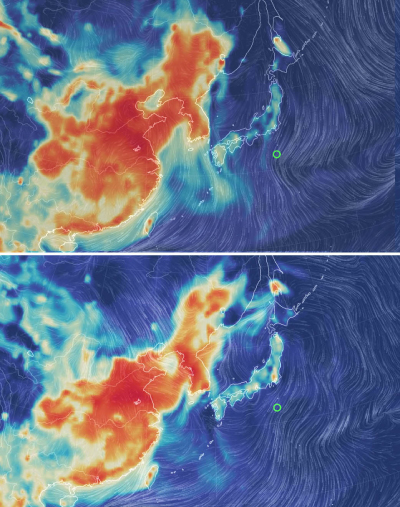 Screen captures from earth.nullschool.net, which utilizes data from the U.S. government’s National Weather Service, show PM2.5 fine-dust particles moving towards Korea from China from Monday (above) to Tuesday (below). [NEW1]

The Moon Jae-in administration’s controversial policy to wean the country off nuclear power is being questioned during a spike in fine-dust particles in the air - and some are connecting the two.

Ruling Democratic Party Rep. Song Young-gil mentioned the issue in a lecture at the Korea Atomic Industrial Forum in southern Seoul on Friday.

Song said that the Moon administration would be better off establishing an environment in which nuclear power and renewables exist together instead of trying to replace nuclear power with renewables.

Since his statement, opposition lawmakers have joined the call for Moon to reconsider his nuclear phase-out policy, citing recent spikes in fine-dust levels.

“The policy to phase out nuclear power has led to a worsening of the fine-dust problem,” said the opposition Liberty Korea Party’s floor leader Na Kyung-won in a party meeting at the National Assembly on Tuesday. “In phasing out nuclear power, the government is trying to replace it with other forms of energy like coal power - it is building seven new coal power plants. The government is going backwards, promoting policies that are unhealthy for the environment when it should be going green.”

“The people want more nuclear power plants,” said opposition Bareunmirae Party Rep. Kwon Eun-hee in a party meeting Tuesday. “I mean, look how even some members of the ruling party like Song Young-gil are speaking out against the phase-out policy.”

PM2.5 fine-dust particles blanketed large parts of the country over the last few days. The daily average of PM2.5 particles in Seoul reached 129 micrograms per cubic meter of air on Monday, the highest it has been in Seoul since 2015, when the Ministry of Environment began collecting data on fine dust.

PM2.5 fine-dust particles are less than 2.5 micrometers in diameter and about 30 times smaller than the width of a human hair. The World Health Organization (WHO) describes them as carcinogenic since PM2.5 particles can travel through the respiratory tract and reach the bloodstream, causing lung cancer and other lung conditions, as well as heart conditions and strokes.

The WHO recommends exposure of no more than 25 micrograms of PM2.5 particles daily.

The Blue House said the topic is not open for public debate.

But there was no public referendum on continuing planned construction of Shin Hanul Unit 3 and Unit 4, which was just about to begin before Moon’s government scrapped the plan in 2017.

“When only three out of the six nuclear power plants were being operated in Taiwan during the phase-out policy, the air quality got worse, especially during the winter due to an increased reliance on coal power plants for heating,” said Yeh Tsungkuang, professor of engineering at National Tsing Hua University in Taiwan. “We also saw that renewables cannot be a stable source of energy because of their high costs. We need to keep the nuclear power plants.”

While the policy to phase out nuclear power was an election promise by Moon, so was a policy to tackle fine dust.

Moon promised as a candidate that he would reduce fine dust in the air by 30 percent if elected. That pledge included working together with China on the issue.

Chinese Ministry of Ecology and Environment spokesperson Liu Youbin suggested in a press briefing last month that fine-dust issues in the two countries are separate and claimed the air quality in China has improved significantly while it has deteriorated in Korea.

“Mr. President, you said that you will reduce fine dust by 30 percent,” wrote another user on the Blue House website on Tuesday. “Please talk to the Chinese government. Ever since they moved a lot of their factories nearer to the coast, we have been bombarded with increased levels of fine dust.”

The Ministry of Foreign Affairs issued a statement on Tuesday in response. “We are continuing conversations with the Chinese government to cooperate on the fine-dust issue,” the ministry said.

The unhealthy levels of fine dust particles that blanketed the country should lift significantly by Wednesday as cold air pushes the dust southward overnight, the National Institute of Environmental Research said Tuesday.