North sends VIP to U.S. to get summit plans going

North sends VIP to U.S. to get summit plans going 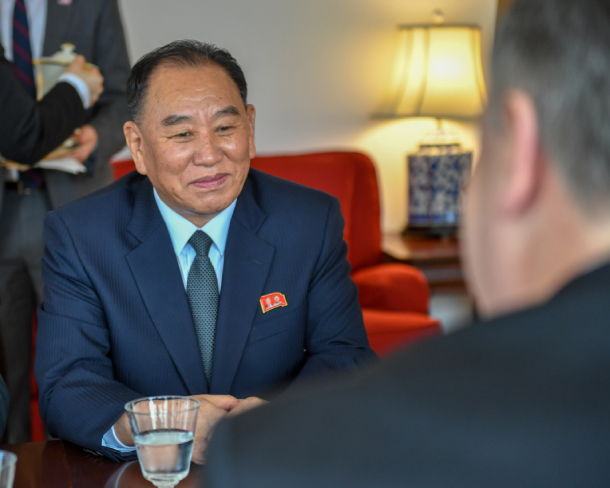 Kim Yong-chol, a top North Korean official, is expected to visit Washington this week to prepare for a second North-U.S. summit, after the American president sent a letter to the North Korean leader over the weekend.

A source familiar with the North-U.S. talks said Monday that Kim, the vice chairman of North Korea’s ruling Workers’ Party’s Central Committee, “wanted to visit Washington immediately,” so the two sides are “working on scheduling a visit for Jan. 17 to 18.”

The letter from Trump was flown to Pyongyang and delivered by hand, according to the CNN source, who also said that Kim Yong-chol could visit Washington as soon as this week to finalize details of the upcoming summit.

Trump, earlier this month, confirmed he had received a “great” letter from the North Korean leader without revealing details and told reporters he looked forward to meeting Kim Jong-un. Trump went on to say during a cabinet meeting on Jan. 3 that there is no “rush” for the North’s denuclearization, adding he could “help” North Korea reach its “tremendous economic potential.”

Kim Yong-chol could be bringing a response from the North Korean leader to Trump’s recent letter, including more concrete details for a second summit: possibly a date and venue. Vietnam has been named as a likely location for the second summit. But more discussions would likely be needed to set the actual agenda amid pressure to produce more substantive steps toward North Korea’s denuclearization.

Another high-level source said, “North Korea and the United States have agreed to hold high-level talks in Washington and are scheduling a date between Jan. 16 and 20. But we will have to wait and see if a final date is set.”

Former spy chief Kim Yong-chol became the highest-ranking official from Pyongyang to visit Washington in 18 years on June 1, when he visited Trump at the White House. This immediately followed a meeting with U.S. Secretary of State Mike Pompeo in New York, and Kim Yong-chol delivered in person to Trump a letter from the North Korean leader. The visit came at a testy period after Trump abruptly canceled a North-U.S. summit in the works; after that visit, the president called for the June 12 Singapore summit.

Kim heading to Washington is seen as an indication that he has been promised a meeting with Trump beforehand. He had been expected to hold talks with Pompeo in New York on Nov. 8. But Kim pulled out at the last minute when it became apparent he wasn’t going to be able to meet with Trump afterward because of scheduling conflicts.

It’s been some 100 days since Pompeo made his fourth visit to Pyongyang on Oct. 7, where he met with the North Korean leader.

Pompeo has been on a Middle East tour since last week but returned to Washington late Monday, a day earlier than scheduled, to attend a family funeral. U.S. ambassadors from around the world are flying into Washington for the Global Chiefs of Missions Conference, scheduled for Wednesday and Thursday. The two-day U.S. ambassadors’ conference, held despite an ongoing U.S. government shutdown, is expected to include a luncheon meeting on Wednesday. Thus, a high-level meeting between Pompeo and Kim, as well as a visit to the White House, is seen as more likely to happen on Friday.

The U.S. State Department has been hesitant to confirm Kim Yong-chol’s visit and a spokesperson said in a statement, “We don’t have any meetings to announce.”

Pompeo told CBS Sunday that the two sides are “working out the details” of a second summit between the two leaders.

Last Friday, he told Fox News that the end goal of U.S.-North Korea negotiations was “the security of American people,” which includes stopping North Korea’s threats such as its nuclear and missile testing.

Pompeo’s remarks seemed to indicate that Washington may be considering some concessions for Pyongyang amid the impasse in denuclearization negotiations.

Some analysts pointed out that this could include some sort of deal that involves the scrapping of North Korea’s intercontinental ballistic missiles (ICBM), which Washington considers a major threat, in turn for a partial easing of sanctions. But other observers have said this is unlikely.

Tongil Sinbo, a North Korean propaganda outlet, on Tuesday pressed for Washington to take appropriate “corresponding measures” during the denuclearization negotiations, warning against the continuing pressure from sanctions.

She told reporters in Beijing, when asked where she was heading, that she was attending an international conference in Sweden.

Sweden is a frequent location for so-called Track 1.5 conferences between North Korea and the United States involving government officials and experts from the private sector.

Choe’s visit sparked questions on whether it was related to preparations for a second Kim-Trump summit and whether she will be meeting with any U.S. officials in Sweden, which could be a process to set an agenda for the summit.

Choe has been named as the counterpart for Stephen Biegun, the U.S. special representative for North Korea, but the two envoys have yet to meet for face-to-face working level talks. Biegun also heads the U.S. team for a bilateral working group with South Korea on the denuclearization issue.

Last year, U.S. Ambassador to the Philippines Sung Kim, a former American nuclear envoy, and Choe held at least six rounds of working-level talks in the truce village of Panmunjom at the inter-Korean border following Kim and Pompeo’s New York meeting to arrange a second summit.