There’s a first time for everything. Korean tennis superstar Chung Hyeon had never before rallied from a 2-0 deficit to win a five-set match until Tuesday, when he pulled off just such a comeback in the first round of the Australian Open. 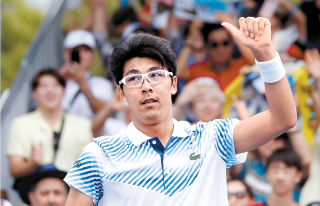 Chung Hyeon celebrates after winning against Bradley Klahn of the United States during the first round of the Australian Open at Melbourne Park Tuesday. [REUTERS/YONHAP]

The 24th-seeded Chung defeated unseeded American Bradley Klahn by three sets to two at Melbourne Park. Chung lost both the first and second sets on tiebreakers before finally finding his swing and comfortably winning the following three sets 6-3, 6-2 and 6-4.

After his come-from-behind victory, the world No. 25 said he fed off the energy of hundreds of Korean fans in the stands.

“I was so surprised to see so many Korean fans, and because they were cheering me on until the end, I couldn’t give up,” Chung said. “A lot of people must have felt I was going to lose when the score was 2-0. After making it 2-1, I felt I would have a chance. Then in the fifth set, I missed a chance to break [Klahn], and the match could have gone either way.”

Chung said he didn’t make any major changes to his approach in the third set, with his back against the wall. He admitted he struggled against Klahn’s serves and forehand shots early on.

“I wasn’t able to find my rhythm in the first two sets,” Chung said. “But once I went down 2-0, I started to relax more and I got lighter on my feet. I wanted to keep positive thoughts in my head because the match wasn’t over yet.”

Chung came out of nowhere at last year’s Australian Open to reach the semifinals. Chung, who was unseeded at the time, knocked off current No. 1 Novak Djokovic in the round of 16 before retiring in the semifinals against eventual champion Roger Federer due to foot blisters.

Following his success at the Australian Open, Chung continued a strong season by reaching the quarterfinals at six consecutive tournaments, starting with the ASB Classic in New Zealand in January. By April, he was No. 19 and officially became the most successful Korean tennis player of all time.

Asked whether he feels the pressure to live up to expectations raised after his performance last year, Chung said he tries not to think about it.

“Rather than worry about that burden, I’ll look at this tournament just as an event I’ll be playing every year until I retire,” Chung said. “I am just trying to do the best I can every match.”

In the second round, Chung will face the 55th-ranked Pierre-Hugues Herbert of France today.