China may be better partner for North’s development: Park

China may be better partner for North’s development: Park 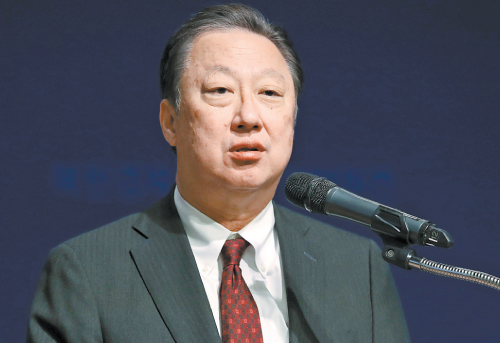 China may actually be a more competitive partner for North Korea’s economic development than South Korea, according to Korea Chamber of Commerce & Industry (KCCI) Chairman Park Yong-maan on Wednesday.

The remark came during KCCI’s third conference on the North Korean economy on Wednesday in central Seoul. The North’s improved relations with South Korea and the United States have sparked anticipation on the future possibility of investment and trade with local companies.

Park, however, noted that China has the potential to be an even stronger partner for North Korea’s economic development than South Korea, warning that simply speaking the same language won’t solve everything.

“One thing I’ve learned from my visit to Pyongyang and the Chinese border to North Korea is that the economic cooperation between the Koreas may turn out to be a more difficult task than expected,” Park said in an opening speech.

“We do have our strengths - like sharing the same ethnicity, language and cultural homogeneity,” he added. “But ethnic Koreans living in Northeast China also have a big interest in North Korea’s economic development, not to mention they have business experience and a Korean accent much closer to that of North Korea.”

The Chinese brand of socialism and the country’s huge amounts of capital were other factors that Park mentioned as strengths compared to South Korea.

Three cities along the border between China and North Korea have an estimated two million ethnic Koreans, mainly descendants of people who moved to the region in the 19th and 20th centuries. Other experts at Wednesday’s seminar agreed that the border area and ethnic Koreans living there will play a big role once economic sanctions against North Korea are dropped.

“Ethnic Koreans have abundant experience and know-how when it comes to doing business in China,” said An Guo-shan, a researcher of economics at Yanbian University.

“Once economic sanctions to North Korea are stopped, there’s a high possibility that ethnic Koreans will want to do business of their own, or act as a bridge for large Chinese companies to jointly enter the market.”

Lee Choon-bok, a professor at Nankai University’s Zhou Enlai School of Government, said that North Korea is likely to designate areas near the Chinese borders as “economic zones” in the early years of development. “We need to develop a cooperation model between South and North Korea and China,” he said.

Researcher Choi Jang-ho, who leads studies regarding unification at the Korea Institute for International Economic Policy, pointed out that there are preparations to be made before devising possible scenarios to benefit from North Korea’s economic growth.

“It’s unlikely that economic sanctions against North Korea will stop before it reaches a level of denuclearization acceptable to international society,” he said. “But we have to prepare in advance to pave the way for economic cooperation [when the time comes].

“The trade agreements we signed with North Korea were mainly about commodities, but we have to expand this scope for exchange of labor, capital and services,” added Choi.