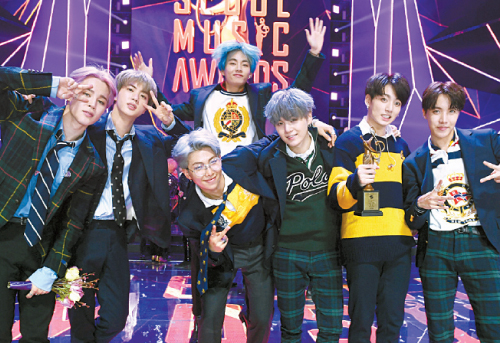 The 28th Seoul Music Awards was held on Tuesday night at the Gocheok Sky Dome, western Seoul, and K-pop sensation BTS took home three trophies including the Grand Prize, starting off what looks to be another successful year for the group.

As was expected, BTS was awarded the Grand Prize for the second time, continuing their streak of success this awards season. The group took home the grand prizes at the 2018 Melon Music Awards, the 2018 Mnet Asian Music Awards and the 33rd Golden Disc Awards.

The best song prize went to iKON for their song “Love Scenario” and the best album prize to BTS for “Love Yourself: Tear,” while the night’s other awards went to popular K-pop acts Exo, Twice, Seventeen, Mamamoo, Red Velvet, Nu’est W, Wanna One, NCT 127, Momoland and Monsta X.

“Thank you ARMY (fan club) for letting us get this prize twice, something that’s not easy for a singer to get even once,” said RM, leader of BTS, while accepting the Grand Prize. “The stories that you tell us give us inspiration. And we hope you know that the songs that we make are our letters to you all. We’re each others’ fans and idols.”

“We’re actually preparing for another album,” said Jin. “We are trying to make our best album yet in 2019, and we hope for your love and support.”

Meanwhile, BTS’s latest album “Love Yourself: Answer” remains on the Billboard 200 albums chart for the 20th consecutive week. The album stands at No. 78 as of Wednesday, slipping from last week’s rank of No. 59.