Growth in cars on the road is steadily slowing

Growth in cars on the road is steadily slowing

Korean cars are losing ground to imports from abroad while sales of eco-friendly cars rapidly grow.

Meanwhile, the total number of vehicles on Koreans roads is growing less robustly than in the past. 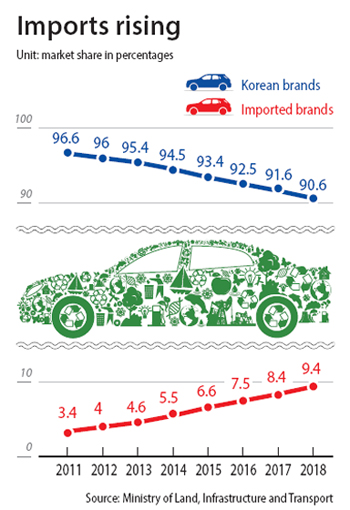 A new switch added in between the two input boxes on Naver’s Papago allows users to translate the same English phrase to a standard or honorific Korean form. [NAVER]

According to a report released by the Ministry of Land, Infrastructure and Transport Wednesday, 23 million vehicles were registered last year, which was a 3-percent increase from the previous year, or 674,000 units.

Among the total number of registered vehicles, Korean vehicles still dominate at 90.6 percent or 21 million units. However, while imported cars only accounted for 9.4 percent or 2.17 million vehicles last year, the market share of imported brands has been growing steadily in recent years.

In 2004, foreign brands only accounted for 1 percent of all registered vehicles. In 2012, that figure grew to 4 percent; in 2015 it hit 6.6 percent; in 2017 it reached 8.4 percent. At the current rate of growth foreign brands are expected to exceed the 10 percent threshold for the first time this year.

Foreign brands accounted for 16 percent of all newly sold vehicles last year, which was a record. This is an achievement considering the problem BMWs had with models catching on fire due to a defect in their emission reduction equipment.

The government statistics showed sales of foreign brands have been seeing a sharp increase.

eco-friendly vehicles are doing well too. Last year, 461,733 units of such “green” vehicles were registered, increasing their shares of registrations from 1.5 percent in 2017 to 2 percent. The number of electric vehicle more than doubled from 25,108 units in 2017 to 55,756 units last year. Hydrogen fuel cell vehicles increased five-fold, from 170 units to 893.

The ministry said people’s interest in environmental protection - particularly with the worsening air pollution of recent years - was a big factor in the sales of eco-friendly cars. Although diesel-fueled vehicles still accounted for 42 percent of all registered cars at over 9.93 million units, their growth rate has slowed down. Last year the number of registered diesel cars grew 3.6 percent compared to the previous year. This was a drop from 4.4 percent in 2017 and almost one third the 8.6 percent growth enjoyed in 2015.