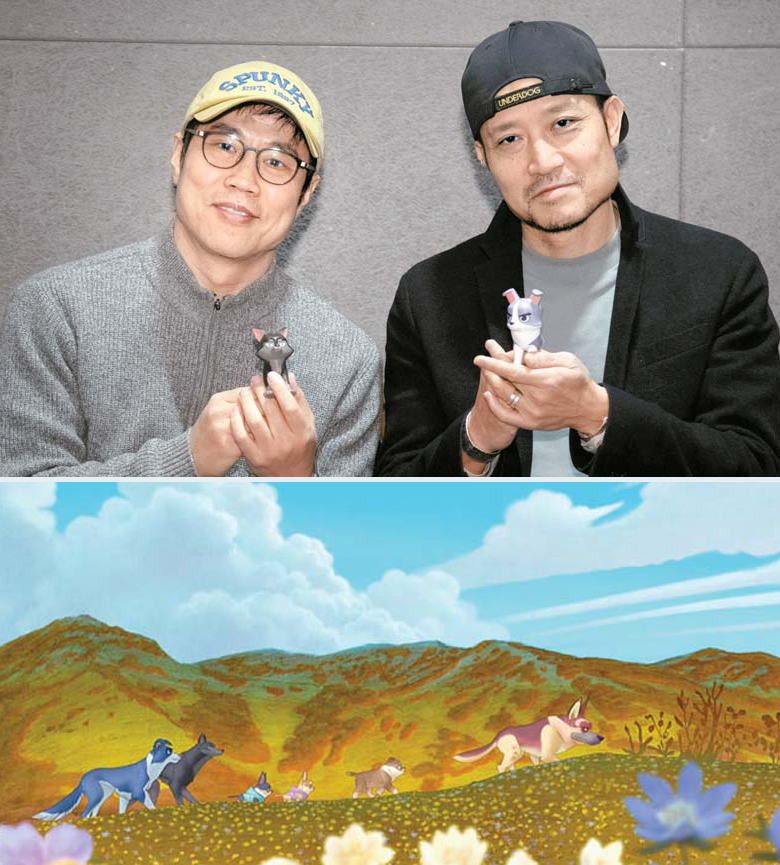 Top: Directors Oh Sung-yoon, right, and Lee Choon-baek who are behind “Underdog.” Above: The pair’s latest offering is about a group of stray dogs on a dangerous adventure to discover freedom. [ODOLTOGI]

In 2011, a glimpse of hope in the gloomy domestic animation market came in the form of director Oh Sung-yoon’s “Leafie, A Hen into the Wild.” With more than 2.2 million tickets sold, the family flick became the best-performing Korean animated movie ever.

Eight years later, Oh has returned to the silver screen with another family film, “Underdog.” Also produced by Odoltogi, the movie was co-directed by Lee Choon-baek, who was Oh’s partner on “Leafie.” “Underdog” took Oh two years to write and six years to produce.

“Underdog” also revolves around a group of animals. Instead of a hen and a duckling, however, the directors turned their attention to a pack of stray dogs. Centering on a pet dog named Moongchi (voiced by Do Kyung-soo from boy group Exo), the story begins when Moongchi meets stray dogs in a quiet forest after he is abandoned there by his owner.

Moongchi initially refuses to join the pack, believing that he will be reclaimed. But after seeing other dogs effortlessly thrown away, he decides to accept his new life. Together, they protect and care for one another and try to become independent from humans. Through the dangerous journey to reach a land completely free from humans, they gradually learn the meaning of freedom and self-identity.

Instead of following the trend of 3-D animation, like major animation studios Walt Disney and Dreamworks, Odoltogi chose to animate “Underdog” in 2-D as a way of differentiating it from competitors in theaters.

“After the film’s preview screening, many people told me that they experienced [mental] healing through the movie,” said Oh during an interview last week. “The story, of course, played a big part in that. But I believe the main contributor to helping viewers feel more relaxed is the 2-D natural landscape background, which exudes a different charm than the fancy 3-D depictions.”

The film made its world premiere last year when it opened the Bucheon International Fantastic Film Festival. Tickets for the film sold out in less than 10 seconds. Hoping to reach out to a wider audience, “Underdog” arrived in theaters Wednesday.

To discuss “Underdog,” the Korea JoongAng Daily met with the two directors at a cafe in southern Seoul last week. The following are edited excerpts from the interview.

Q. How did you get the idea for the story of “Underdog?”

A. Oh: It instantly hit me when I saw a shocking scene on [SBS’s] “Animal Farm.” In one episode, I saw a sick Shih Tzu whose eye was crushed and whose hair was all messed up. The poor little thing was kept in a dog shelter and looked like a monster. When my eyes met the dog’s eyes, I instinctively knew that this was a story I could tell through animation. This is not common for a movie director, especially animation directors, since many prefer to avoid uncomfortable topics and try to come up with something bright and lively.

What attracts Odoltogi (where Oh sits as CEO) to the darker themes?

Lee: We believe there is simply more to tell [in darker themes.] I think this is because animation is not a mainstream genre in the film industry. Many Hollywood animations touch on brighter themes. In order to compete with a much smaller budget, we have to have our own competitiveness that’s different. But this doesn’t mean our films don’t have commercial value. Though dealing with darker themes, we try to appeal to a wider audience, mainly through humor.

Oh: As artists, we naturally seek to try something that nobody has done before. We’re more interested in seeing something new or hearing a different part of the same story, and I hope to communicate with people through that uniqueness. That’s the reason we’re telling the story of stray dogs instead of pet dogs. Instead of making them look sad, our movie tells their own [brave] story. They’re not just stray dogs, but dogs who intentionally set off to find their own direction in life.

Like you said, one of the charms of “Underdog” is the humor - thanks to the small, old boss Jjangah, voiced by Park Chul-min - which largely comes from wordplay and the use of a dialect. These are quite difficult to portray in foreign languages. Nevertheless, “Underdog” has been sold to 69 foreign markets. Are you concerned about the humor that could get lost when translated?

Lee: That is actually one of our biggest concerns. But thankfully, many people seem to understand the humor because of the images. When the movie was screened in China at the Silk Road International Film Festival, we were told that the subtitles in Chinese did not accurately deliver the jokes from the original. But during the screening, we realized that the Chinese audiences laughed at the same points the Korean viewers did. I believe that was possible thanks to [what was on-screen].

Freedom is big part of the story. It was also a theme in “Leafie.” What does freedom mean to you?

Oh: We bring up the issue of freedom through dogs, but we also wanted to apply that freedom to humans. For many reasons - like economic and political factors - we are not able to live independent lives. We know that there is something wrong and unreasonable about this, but we choose not to break away from those situations. I am also like that. Even after the success of “Leafie,” it was difficult to receive sufficient funding for the next project.

What I wanted to say through “Underdog” is that having the desire for freedom is very natural. So even if the situations don’t allow for complete freedom, it’s essential that people continue to put in effort to achieve that freedom because that process is very important.

The dogs ultimately find themselves in the demilitarized zone (DMZ), which could be a surprise to viewers. Why did you choose the DMZ despite the possible controversy it could cause?

Lee: When we first came up with the idea to make the DMZ part of the backdrop seven years ago, everyone was shocked and worried. My generation grew up with strong anticommunist education, so we came to perceive [anything related to North Korea] to be a taboo. But as artists, we hoped to break the taboo and take on a challenge.

The DMZ is a very strange place. The place is unrealistically quiet and the things there haven’t been touched by human hands, making it a perfect place for animals to live. Though there are mines hidden here and there, we thought the dogs would be able to live at peace on such natural land.

Oh: We also wanted to symbolically compare the situations of the dogs and Korea. For political reasons, the South Korean people are living in a place that is like an island, not a peninsula. This, in turn, takes away a lot of our freedom. I hope the movie gives the audience a chance to think about this.

This cramped feeling can be seen through the number of fences depicted throughout the film, right?

Oh: That’s right. At first is the wire from the dog farm. Then it’s a fence that bars the entrance to the mountain, and the climax is the seemingly endless fence at the DMZ. Only when we pass through that fence do we get to live a new life.

As big names in the domestic animation movie industry, what do you think is the reason for its slow growth?

Oh: In my opinion, lots of Korean animated features have failed because people try to find commercial value out of it. When filmmakers produce and write a script trying to make money out of animation, it’s quite obvious to the audience. In order to capture people’s hearts, it is important to work on an animated film project with sincerity.

You are working on a sequel to “Underdog.” What kind of story are you planning to tell through the characters’ return?

Oh: The second “Underdog” will be a coming-of-age tale of those dogs living in DMZ. They will face challenges like the risk of stepping on mines and the fierce competition to survive against the other wild animals living there. The movie could be an answer to those who wonder whether animals can live without humans.