Kaesong, Kumgang are not being revived soon

Kaesong, Kumgang are not being revived soon 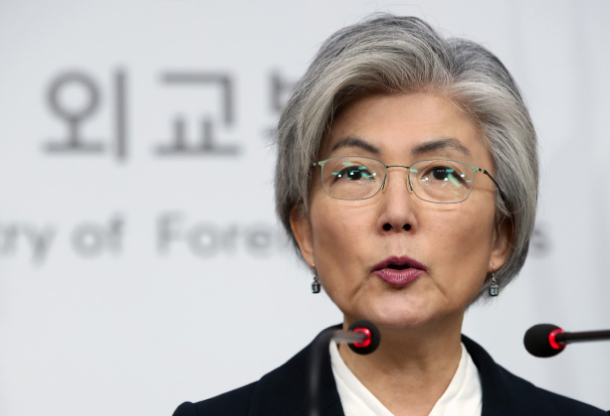 Speaking at a New Year’s press conference at the Foreign Ministry in central Seoul, Kang pledged to “concentrate all diplomatic efforts” so that 2019 “becomes the year to earnestly embark on the journey toward the complete denuclearization and establishment of permanent peace on the Korean Peninsula.”

She said a second summit between North Korean leader Kim Jong-un and U.S. President Donald Trump should take place soon, and it will “speed along” North-U.S. denuclearization negotiations.

“Our government is not at a stage to review the resumption of the Kaesong Industrial Complex and [tour groups to] Mount Kumgang for now,” said Kang. “However, it is a matter of concern for our people, as well as North Korea.”

She added that Seoul and Washington have comprehensively discussed many corresponding measures to reward the North for denuclearization, but that “the North-U.S. negotiating table will ultimately produce specific results.”

North Korean leader Kim in a New Year’s address said that he was willing to resume operations of the Kaesong Industrial Complex and Mount Kumgang tourism “without any preconditions.”

The Kaesong Industrial Complex, the last vestige of inter-Korean economic cooperation from the Sunshine Policy of the late 1990s and 2000s, was shuttered by South Korea in February 2016 in response to the North’s nuclear and missile provocations. Mount Kumgang tourism came to an end in 2008 after a North Korean soldier fatally shot a South Korean tourist.

Kang stressed that the resumption of business at the Kaesong complex or Mount Kumgang will eventually “require multifaceted review” because of the wide-ranging sanctions on the North, including stiff UN Security Council resolutions and unilateral measures by countries.

Restrictions include bans on the transfer of bulk cash, on joint projects as well as on various exports into the North.

Kang said last week at the National Assembly that there is a need to search for ways to tackle the Kaesong and Kumgang issues while preventing bulk cash transfers to North Korea and violating international sanctions. On Wednesday, she drew a clear line that such a review is not happening right now.

Washington’s corresponding measures in return for Pyongyang’s denuclearization efforts could include a declaration to end the 1950-53 Korean War, humanitarian aid or a “permanent North-U.S. dialogue channel,” said Kang.

Her reference to a permanent dialogue channel could indicate a liaison office between the North and the United States.

“There have been various discussions on corresponding measures, but ultimately, it is something that the United States has to provide, and North Korea has to accept this,” she added.

Kang added that a second North-U.S. summit as well as a visit to Seoul by Kim Jong-un “will make great progress toward denuclearization and inter-Korean relations and the settlement of permanent peace.

“The approach to denuclearization dialogue, unlike in the past, is top-down,” said Kang, adding that the “will of the top leaders will continue to be essential” in this process.

She pointed out that under such circumstances, unlike in the past where a declaration of the North’s nuclear facilities and stockpile was the first step toward denuclearization, a more comprehensive deal needs to take into consideration “physical limitations” and that “implementation cannot happen all at once.”

Seoul’s approach is a “comprehensive deal toward complete denuclearization” of the North and a “phased implementation.” Kang added that Washington “also shares considerably” Seoul’s view.

Kang added that she and U.S. Secretary of State Mike Pompeo are constantly checking in on their “joint goal of complete denuclearization” of the Korean Peninsula.

She brushed off speculation in the Korean media that the United States is shifting its policy toward scrapping North Korea’s intercontinental ballistic missiles (ICBMs) rather than denuclearization.

Both Kang and Pompeo will attend the three-day World Economic Forum that kicks off next Tuesday in Davos, Switzerland.

She said, “South Korea and the United States have unprecedented close communication between Secretary Pompeo and myself, the working group and various levels.”

On relations with Japan, which have been strained because of history issues and a radar controversy, she said, “We will work toward advancing the two countries relations in a future-oriented way through various diplomatic channels including foreign ministerial meetings.”

“While we have difficult and complicated issues, it is the role of the diplomats to make sure bilateral relations don’t worsen and work toward managing the issues to enable economic, cultural and people-to-people exchanges to continue to advance.”

But she maintained that the 2015 bilateral agreement “cannot be a true solution” to the Japanese military’s wartime sexual slavery issue though the so-called comfort women agreement will not be renegotiated.

She added that Seoul will actively work with the international community so that the “comfort women victims’ painful history and experience do not disappear.”

This year also will see a Korea-Asean special summit, which would be an opportunity to bolster the government’s New Southern Policy to improve relations with Southeast Asia countries.