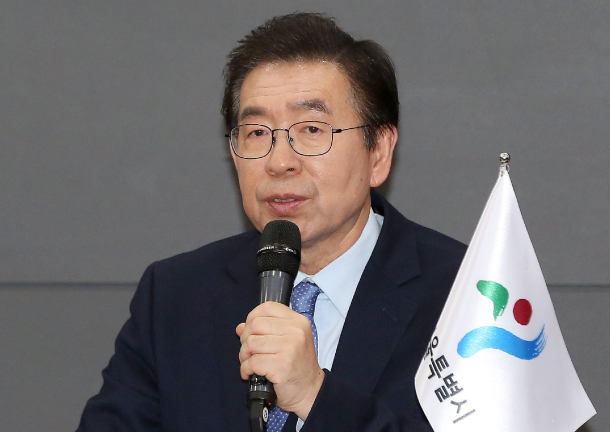 Seoul Mayor Park Won-soon delivers remarks at a ceremony to sign a memorandum of understanding on the setup of the Asia-Pacific Center for Environment and Health at the Seoul Global Center in central Seoul on Tuesday. [YONHAP]

Seoul Mayor Park Won-soon, in his New Year’s press conference at City Hall Wednesday, said he is confident the government’s mobile payment system Zero Pay will be a success when it launches in March.

“There are questions as to whether the transaction system will take off,” Park said in front of dozens of reporters at City Hall. “But people who are able to read the trends in the market and consumer behaviors will be able to tell that in a short time, everyone will be paying with their phones. It’s not a secret that we have the world on our palms when we hold our cellphones.”

Zero Pay is a mobile transaction system that is integrated with existing commercial banking and payment apps. Consumers can use it to pay by scanning Zero Pay QR codes at participating businesses.

Once consumers scan the QR codes with their apps and enter the amount they want to pay, the money will be transferred from their bank account to the business’s account. The payment system reduces processing fees to zero, or near zero, for small merchants.

The project was put forward by the Ministry of SMEs and Startups and the Financial Services Commission.

Partner companies include Naver Pay, Kakao Pay, BC Card, Nonghyup Bank, KEB Hana Bank, Shinhan Bank and Woori Bank. Their users can access Zero Pay on each platform. The city and provincial governments of Seoul, Busan, Incheon, South Gyeongsang and South Jeolla have also joined the initiative to include independent businesses in their regions in the new payment system. Seoul began a test launch of Zero Pay on Dec. 20. About 50,000 independent businesses in Seoul signed up for the payment system.

In response to a question about the controversial redevelopment of the Euljiro area in central Seoul, Park said that urban development projects will focus on preserving some historical neighborhoods.

“We have to step away from our previous practices in urban development, like bulldozing through an area and rebuilding from nothing,” Park said. “We have to preserve the historical and traditional pockets of the city. For example, those old buildings across the Jongno District Office may seem dilapidated, but they’re actually quite beautiful, historical buildings. I’ve told my policy aides to not even think about changing that area.”

In regard to the fine-dust particle problem that plagued the city over the past few days, Park said that the city government plans to install condensing boiler technology throughout facilities in the city to reduce emissions.

“In addition to banning public officials’ cars and old diesel-fueled cars from the road on heavily polluted days, the city government is looking into condensing boiler technology that is said to reduce fine-dust particles emitted into the air by about 39 percent,” Park said.