Chung Hyeon crashed out of the Australian Open in the second round Thursday, unable to match a stunning run to the semifinals from a year ago. 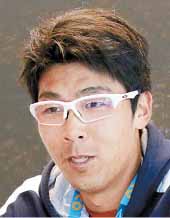 Chung, seeded 24th, fell to the unseeded Frenchman Pierre-Hugues Herbert by three sets to one at Melbourne Arena.

Chung is the top Korean at No. 25 in the world rankings, 30 spots higher than Herbert.

But it was Herbert who dominated Chung from the start.

The match was suspended for about half an hour due to rain after the first set. Chung returned from the break to take the second set with ease, only to drop the next two sets in an early exit.

With a win, Herbert will play his round of 32 match against 16th seeded Milos Raonic of Canada Saturday.

With the second-round elimination, Chung is expected to tumble in the world rankings. His career high is No. 19 last year, but he could drop outside the top 50 after the end of the Australian Open.

Chung defeated unseeded American Bradley Klahn in the first set by three sets to two at Melbourne Park. Chung lost both the first and second sets on tiebreakers before finally finding his swing and comfortably winning the following three sets 6-3, 6-2 and 6-4.

Chung withdrew during the second set in the semifinals against Roger Federer due to pain caused by blisters.