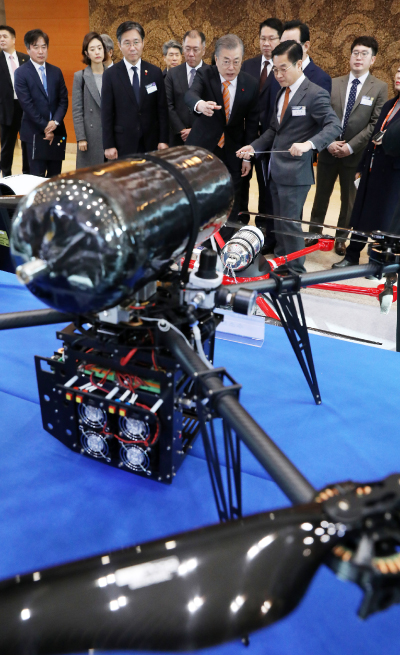 President Moon Jae-in listens to a Hyundai Motor manager explain hydrogen-powered vehicles and drones before attending an event on hydrogen power in Ulsan on Thursday. [YONHAP]

The government hopes the so-called hydrogen economy will create 420,000 jobs by 2040.

On Thursday, the government laid out a roadmap to making hydrogen-related technologies a key new growth engine for Korea.

At an event in Ulsan attended by President Moon Jae-in, Trade, Industry and Energy Minister Sung Yun-mo and the Hyundai Motor Group heir apparent and vice chairman, Chung Eui-sun, the government described plans to raise the sales of hydrogen fuel cell electric vehicles (or FCEVs) to 810,000 units in total by 2022. That figure includes 670,000 sold in the local market and 14,000 units exported. This year alone, the government is hoping for more than 4,000 FCEV unit sales.

The ultimate goal is to sell a total of 6.2 million units, with exports exceeding 3.3 million units. Last year, Korea sold a total of 1,800 units, half of which were exported.

The government said its 6.2 million vehicle sales goal by 2040 isn’t a huge stretch considering that FCEVs are a major global trend with China and California both raising their targets for hydrogen fueled vehicles on their road to 1 million. Japan has raised its target to 800,000 and Germany to 1.8 million by 2030.

The government also promised expansion of infrastructure for FCEVs, which has been one of the biggest obstacles to demand picking up.

The government said that when all core parts of the vehicles are developed by Korean companies by 2022, prices will drop.

When annual production of hydrogen fueled vehicles reaches 100,000 by 2025, sticker prices may fall to around 30 million won.

One of the first steps that the government is taking is operating 35 hydrogen-fueled buses this year. It plans to raise that number to 40,000 by 2040.

The government will be also supplying hydrogen as an energy source for homes and commercial buildings. It hopes to produce 15 gigawatts of power through hydrogen by 2040, and eight gigawatt will be allocated for domestic use.

The government estimates that a boosting of the infrastructure will lower the price of hydrogen fuel.

“I want to say the hydrogen economy is the new hope for the Ulsan economy and a challenge for the Korean economy,” Moon said. “Ulsan is a city that never sleeps.”

“Korea’s industrialization history started the moment the first shovel hit the ground to create the Ulsan-Mipo Industrial Complex in 1962,” the president added.

“When the automotive, shipbuilding and petrochemical plants in Ulsan ran continuously without break, our economy boomed.”

He said that is why he chose Ulsan as the first region in his nationwide economic tour of this year.

“It will create new industries in all areas from production, storage and logistics while contributing to jobs,” Moon said.

“Securing the lead in the global market where the [global] hydrogen economy is just starting is important,” Moon said. “Already, many countries are competing to take the lead.”

He said Korea has a lot of potential to comb hydrogen technologies with conventional industries including automotives, ships and petrochemicals.

Moon praised Hyundai Motor’s achievements including the world’s first commercialization of hydrogen fueled vehicles and a FCEV that can travel 600 kilometers (372 miles) on a single charge.

“Our hydrogen fueled vehicle owns 50 percent of the global market share,” he said.

The president said the government’s goal is to make Korea the No. 1 country not only in hydrogen-fueled vehicles but also on hydrogen fuel batteries by 2030.

The president said the hydrogen economy isn’t only about finding a new growth engine.

“Currently, we rely on imports for 95 percent of our energy,” Moon said. “We’re an energy-poor country.”

He said the hydrogen economy will not only provide stable growth but also strengthen the nation’s energy security.

“Our people become strong when faced with crisis,” Moon said. “We achieved industrialization from the ruins of the [Korean War], and when we felt [the global] oil shock, we turned it into opportunity. During the [late 1990s] financial crisis and the [2008] global financial meltdown, we overcame challenges with ICT industries and expanding our core export goods.”

“The hydrogen economy will once again open an opportunity for us,” he said.

Hyundai Motor Group became the first company in the world to commercialize an FCEV with its Tucson ix.

Last year, it released the Nexo, which can travel 609 kilometers on a single charge that takes only five minutes.

Once the factory is complete in 2022, it will produce 40,000 hydrogen fuel cell stacks a year, which is 13 times more than its current production capacity.

During the groundbreaking ceremony, Vice Chairman Chung laid out a 2030 vision in which Hyundai Motor will be producing annually 500,000 units of FCEVs and 700,000 hydrogen fuel cells.

During a meeting with Moon at the Blue House earlier this week, Chung said his company will be investing 5 trillion won over the next four years in EVs and FCEVs.