Mercedes EV to launch in Korea

Mercedes EV to launch in Korea 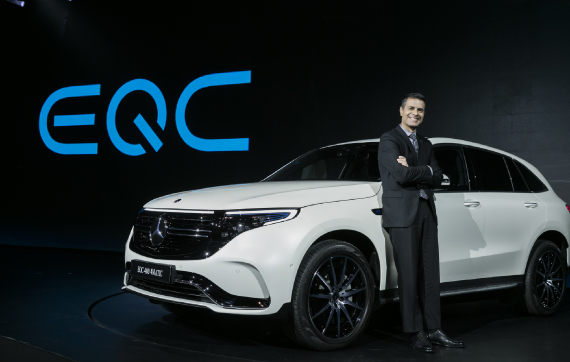 Mercedes-Benz Korea CEO Dimitris Psillakis poses with the automaker’s electric vehicle (EV), the EQC, at the Hotel Shilla, central Seoul. The German automaker will launch the EV on the Korean market this year along with four other plug-in hybrid vehicles. [MERCEDES-BENZ KOREA]

Mercedes-Benz Korea is setting its sights on the local eco-friendly auto market with the introduction of an all-electric vehicle (EV) along with hybrid offerings this year.

The Korean unit of the German brand announced Thursday that it will be introducing 14 new models to the local market this year including the EQC, the first model under its electric EQ brand, as well as four plug-in hybrid EVs at a New Year’s press conference at the Hotel Shilla in central Seoul.

“2019 will be the year of the EQ,” said Dimitris Psillakis, CEO of Mercedes-Benz Korea. “We will do our utmost to provide the best products and services in the upcoming era of future mobility.”

The premium electric SUV EQC, unveiled globally last September, is the German automaker’s current flagship EV. The promised hybrid models will range from SUVs to sedans, according to the automaker.

Along with its entry into the local EV market, the German brand announced that it is also preparing its charging infrastructure.

Mercedes-Benz Korea’s push into eco-friendly vehicles comes as it was embroiled in controversy last year regarding its vehicles’ emissions certifications.

Last month, the automaker said it will appeal a court decision after it was found guilty of violating environmental and customs laws regarding the emissions certification process. The company was fined 2.81 billion won ($2.5 million) and an employee in charge of certifications was handed an eight-month sentence.

Regarding the legal action, Psillakis promised that the company is following up on the newest regulations.

“We have a very different changing and toughening regulatory environment around us,” said Psillakis. “We place processes to safeguard so that we can adapt to the new regulations as fast as possible.”

The company also addressed concerns surrounding recall plans for its vehicles equipped with faulty Takata airbags, saying that it is planning a mass recall in the second quarter of this year of around 30,000 vehicles.

The German automaker was the best-selling imported brand last year, selling 70,798 vehicles in the country.

With last year’s sales, the Korean market is the fifth-largest market for the brand after China, the United States, Germany and Britain.