Sohn ‘bets her life’ on innocence

Sohn ‘bets her life’ on innocence 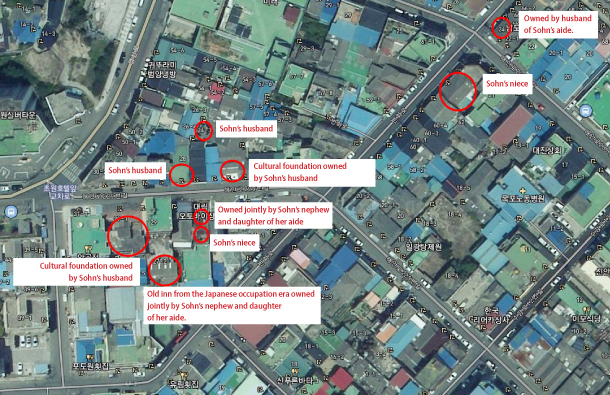 Nine buildings located in the old city center of Mokpo, South Jeolla, bought by Rep. Sohn Hye-won, her relatives and an aide’s relatives.[NEWS1]

Suspicions continue to swirl around a ruling party lawmaker accused of using inside information to make a killing in real estate.

Leaders of the ruling Democratic Party (DP) announced Wednesday that they asked the legislature to conduct an internal investigation into the purchase of nine buildings by DP Rep. Sohn Hye-won, her family members and an aide in an old district of Mokpo from March 2017 to September 2018.

Sohn allegedly knew that the Cultural Heritage Administration (CHA) would be designating the area as a cultural site before buying the buildings. She is a member of the National Assembly’s culture, sports and tourism committee.

Last August, 114,000 square meters (28 acres) of that area were designated a “modern history and culture site” by the CHA, and the price per pyeong (36 square feet) for some of her buildings reportedly jumped around fourfold.

Adding to the suspicions are contradictory public statements by her relatives.

One of her nephews told SBS News that he received 100 million won from Sohn to buy a stake in an inn from the Japanese colonial era. He told SBS he had no say in the building’s maintenance and only lent his name to complete the purchase. That nephew’s father - Sohn’s younger brother - told SBS he had no idea his son was involved in the purchase since he hadn’t spoken with Sohn in almost a decade.

Such statements fueled suspicions that Sohn was using her relatives’ to disguise her own real estate speculation. The lawmaker rebutted the accusations on a popular radio program Thursday, saying she would “bet [her] life” on the fact she didn’t use her nephew’s name to engage in speculation.

“If it is indeed speculation, I will donate my entire fortune to the government,” she added.

Sohn claimed she had no interest in making money on real estate, and said that can be proven because she “never bought an apartment in Gangnam despite having lived over a decade in Apgujeong-dong.” Gangnam is a region in southern Seoul well known for its high-priced apartment homes that are frequently the subject of rampant speculation. Apgujeong-dong is a well-known part of Gangnam.

The contradictory statements from her brother were owed to a “tragic family history,” she said, admitting she had indeed purchased the buildings with her nephew without her brother’s knowledge.

According to a JoongAng Ilbo exclusive from Thursday, Sohn also allegedly brought up the idea of government subsidies being used to renovate some of the buildings she bought at a dinner with Mokpo city officials in May 2017, which included Mokpo’s mayor at the time.

Also present at that dinner was one of Sohn’s nieces, to whom Sohn said she gave 100 million won ($89,019) to buy three buildings in Mokpo because the niece was living a “difficult life” running a bar in Seoul.

Some of the buildings Sohn bought were eventually designated registered cultural assets in their own right. Repair and maintenance costs for such buildings, which are primarily sites with contemporary historic significance, are either wholly or partly funded by public money, while inheritance and land taxes are halved for owners. This often raises their value and invites speculation.