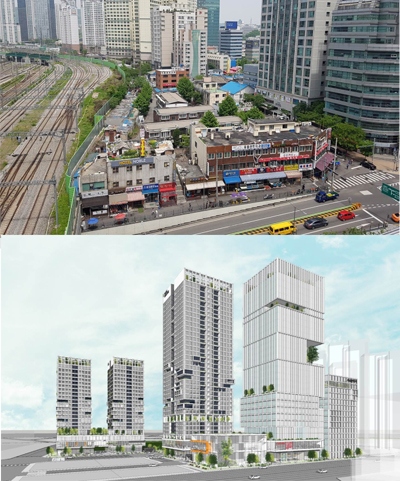 The Seoul metropolitan government on Thursday approved a revision to a redevelopment plan for an old neighborhood, top, in Yongsan District, central Seoul. The area will have high-rise office and residential buildings as shown in the artist’s rendition, above. [SEOUL METROPOLITAN GOVERNMENT]

The Seoul metropolitan government approved a revision to a redevelopment plan for an old neighborhood in Yongsan District, central Seoul, on Thursday, so that buildings larger and higher than originally planned can be built in the area.

“The city planning committee passed a plan to build high-rise office and residential buildings in the area north of Sinyongsan Station in Yongsan District,” the city government said in a statement on Thursday.

“The plan has been slightly changed in terms of the volume of the buildings, but the plan stands as it was drafted in 2015, which was to include at least 26 public housings.”

The area is a 22,277-square-meter (5.5-acre) space north of Sinyongsan Station, close to Yongsan Station. According to the city government, the area is mostly made up of buildings lower than five stories and older than 20 years.

“Some of the dilapidated structures are also unauthorized buildings,” the city government said in its statement.

“The only major difference to the plan from 2015 is that the buildings could be slightly taller and larger,” said Lee Chang-gu, a policy director of Urban Revitalization Division of the city government.

“These are but a plan, and the buildings can look different when completed - we need to decide on the specifics from now on,” said Byun Jong-jin, an employee of the Urban Revitalization Division.

“Projects of this type usually take about three to four years in the construction stage alone, so we do not know yet when they will be completed.”

“Once they are complete, we hope that they will boost the capacity of Yongsan altogether,” the city government said.

Lee said the renovation plan is separate from the controversial development plan for Yongsan District announced by the mayor last year and scrapped shortly after a spike in real estate speculation.

“The plan is not connected to the Yongsan development plan,” Lee said.

When Seoul Mayor Park Won-soon was in Singapore in July last year to receive the Lee Kuan Yew World City Prize, he proposed building a convention center above the railroad tracks between Seoul Station and Yongsan Station in a project modeled after the Paris Rive Gauche.

Park’s announcement was followed by a spike in real estate speculation in Seoul, and some experts linked the two events, though the Seoul city government had shared plans to develop Yongsan for years. Park put the plans on hold in August.

In his most recent comment regarding the plan, Park said they are still on hold.

“There has been no change to the policy of putting a stop on these renovation plans - for one, the real estate prices haven’t stabilized yet,” Park said in response to a reporter’s question at a press conference at the City Hall on Wednesday. “But the city of Seoul will go ahead with other plans as needed for the continued advancement of the city.”