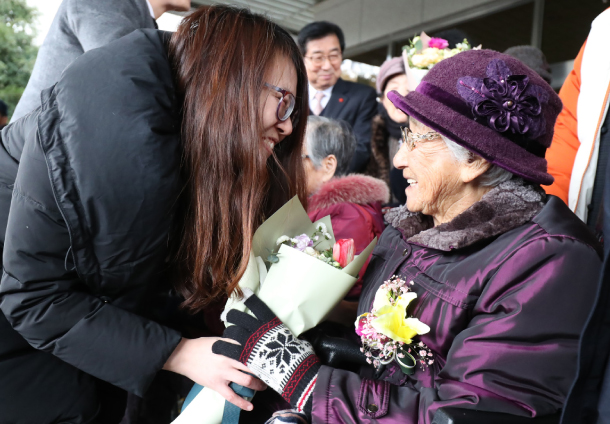 A supporter presents a bouquet to a victim of the Jeju massacre on Thursday after a Jeju court dismissed charges against over a dozen survivors of the bloody 1948-54 government-civilian clash, effectively clearing their names after 71 years. [YONHAP]

A district court on the southern island of Jeju on Thursday dismissed charges against over a dozen survivors of a bloody 1948-54 government-civilian clash, a ruling that effectively cleared their names after 71 years.

The Jeju District Court made the landmark decision in a retrial involving 18 survivors, including 99-year-old Lim Chang-eui.

The ruling essentially quashes convictions handed down by a military court in 1949. The court revoked the initial indictments on grounds of procedural errors in the court proceedings and that there are insufficient grounds to try the defendants.

The Jeju massacre was a government-civilian conflict that lasted from 1948-54 and was an outgrowth of Korea’s ideological division following its 1945 liberation from Japan’s colonial rule. A 2003 government report put the number of civilian deaths at between 25,000 and 30,000, about 10 percent of the island’s population at the time. In the decades after 1954, authoritarian governments distorted or covered up the truth behind the incident and muzzled victims for the sake of public order and peace, the victims and their families have claimed. Some conservatives defended the government’s bloody crackdown on islanders as part of a campaign to “exterminate communist sympathizers.”

The victims, aged between 85 and 99, applied for a retrial in 2017, claiming they were wrongfully convicted and served time in prison after being tortured and abused.

They were sentenced to prison terms of up to 20 years for mutiny and violation of the defense security law. Government findings showed that a total of 2,530 people were convicted in connection with the Jeju massacre. Most of them were later never accounted for or died in prison.

The majority of the victims claimed they were arbitrarily arrested by the military police, interrogated and tortured before being forced to sign a forged statement confessing to crimes.

The incident has left deep scars on the victims and their families. Many of their children encountered discrimination when they looked for employment because of their parents’ criminal convictions.

President Moon Jae-in issued an apology to the victims last year, vowing to provide them with support and to retrieve the remains of the missing. Moon also became the first sitting president to attend a memorial service on the island after President Roh Moo-hyun did so in 2006. A revision to the bill designed to help clear the victims’ names and provide state compensation is still pending in the National Assembly.