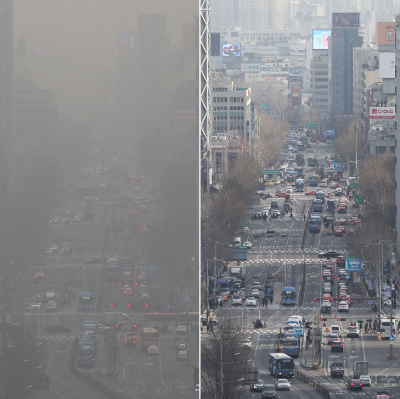 Left; A road in Jongno District, central Seoul, was blanketed with fine dust on Tuesday. Right: The same road looks much clearer after fine dust was blown south on Wednesday. [YONHAP]

The thick smog that blanketed most of the country over the weekend was largely from pollutants from China, the JoongAng Ilbo reported exclusively Thursday after analyzing the Korean and Chinese governments’ data on fine dust movements in the atmosphere.

It found that rises and falls in the AQI in China were mirrored in the levels of PM2.5 in the atmosphere over Korea last week.

The AQI is calculated based on the density of five major air pollutants in the air: ozone, particulate matter (which includes PM2.5 particles), carbon monoxide, sulfur dioxide and nitrogen dioxide.

PM2.5 particles are particles less than 2.5 micrometers in diameter and about 30 times smaller than the width of a human hair.

The World Health Organization (WHO) describes them as carcinogenic since PM2.5 particles can travel through the respiratory tract and reach the bloodstream, causing lung cancer and other lung conditions, as well as heart conditions and strokes. The WHO recommends daily exposure of no more than 25 micrograms of PM2.5. 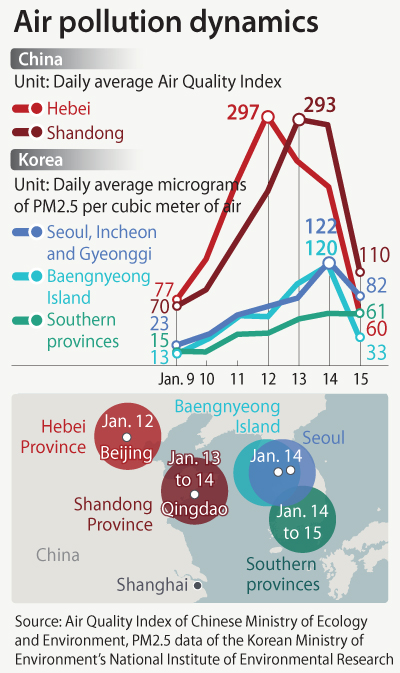 The AQI rose rapidly in Hebei Province, where Beijing, Tianjin and Tangshan are located, northwest of South Korea from Jan. 10, peaking at 297 on Saturday. The index started to drop through Sunday, decreasing to around 60 on Tuesday.

The AQI rose and dropped similarly in Shandong Province, located south of Hebei - but with a day’s delay. The AQI started to rise in the province on Friday and peaked at 293 on Sunday before dropping gradually.

The PM2.5 level rose similarly across Seoul, Incheon and Gyeonggi: the average across the three regions rose from 35 micrograms on Jan. 10 to 58 micrograms on Friday, 80 micrograms on Sunday and peaked at 122 micrograms on Monday, the highest it has been since 2015, when the Environment Ministry started collecting data on fine dust.

“The high-pressure air moved from China towards the West Sea from Sunday afternoon, and it stayed over the West Sea on Monday,” said Park Il-soo, a professor of environmental science and head of a research center on air pollution at Hankuk University of Foreign Studies. “The fact that the PM2.5 level was higher in Baengnyeong Island than near Seoul on Sunday is evidence that the fine dust flew eastward from China into Korea.”

“What we saw was that the air pollutants flew into Korea from the north side on Friday,” said Jang Im-seok, head of the air quality forecast center of NIER. “Then more air pollutants from China flew in from the west side on Sunday, across Baengnyeong Island.”

Jang said the pollutants mixed with domestic emissions and hovered over Korea as the air was stagnant, reaching a peak on Monday.

The smog in Korea lifted from Tuesday night after cold air pushed it southward.

But the country should brace for unhealthy levels of fine dust in the air this weekend, according to NIER.

“The high-pressure air coming from Siberia will change its form slightly and hover over the West Sea [close to the weekend],” Jang said. “This will push the air pollutants from China into Korea again.”