Korea gets an easy path to the AFC Cup

Korea gets an easy path to the AFC Cup 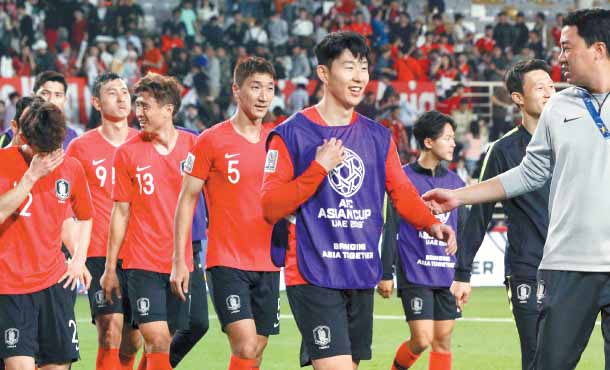 After all group matches ended at the 2019 Asian Football Confederation (AFC) Asian Cup on Thursday, the brackets for the knockout stage were revealed.

Korea’s round of 16 match will kick off on Tuesday at 10 p.m. Seoul time. If Korea moves on, then in the quarterfinals, Korea will play a winner between Qatar and Iraq. Korea has a dominant all-time head-to-head record against Bahrain at 10 wins, four draws and two losses.

Thanks to the Taeguk Warriors’ victory in Group C, they have an easier path through the knockout stage. Korea finished its Group C action with three wins, totaling nine points. Korea defeated the 116th-ranked Philippines and 91st-ranked Kyrgyzstan, both by one goal to nil, before defeating 76th ranked China 2-0.

A win allowed Korea to avoid Japan or Iran until the final, the heavy favorites to win the tournament. However, Korea may face a challenge in its bracket in the semifinals, as it may play against defending champion Australia in the semifinals.

At this year’s Asian Cup, Korea is looking for their first Asian Cup trophy since 1960. In addition, this is also head coach Paulo Bento’s first official FIFA tournament since he was appointed head coach in August 2018. Since Bento’s appointment, Korea has had an unbeaten record of seven wins and four draws in 11 matches, which include the friendlies.

As Korea is assigned in an easier bracket, fans are again curious whether Lee Seung-woo will get any playing time in the remaining matches. Lee was a last-minute addition to the Korea national football team, replacing injured forward Na Sang-ho. Although Lee arrived on time for Korea’s opening match against Kyrgyzstan, Bento didn’t play Lee in any of Korea’s three group matches.

Lee made headlines when he was caught expressing his anger during Korea’s match against China. In the match, Bento used his last substitution card in the 89th minute for Son Heung-min, replacing him with Koo Ja-cheol. Right at the moment, Lee kicked his water bottle and his towel from the warm-up area. When he walked back to the bench, Lee took off his shin guards and threw them on the ground.

Except for the goalkeepers, Lee is the only player on Bento’s roster to not have played in a single match at the Asian Cup.

“I understand how Seung-woo feels,” said Ki Sung-yueng after the match. “He’s probably disappointed for not being able to play in the match. He’s still a young player. I’ll talk to him.”

This year, the top two teams from each group will advance to the round of 16, and the four best third-place teams will also advance as the tournament has an expanded field of 24 teams.

Due to this, 100th-ranked Vietnam was one of four lucky teams to earn their spot in the knockout stage. Led by Korean head coach Park Hang-seo, Vietnam completed their Group D action with one win and two losses, totaling three points. As Bahrain, Kyrgyzstan and Oman were already ahead of Vietnam in points and goal difference, they had to wait for the result of the final group match of the tournament between North Korea and Lebanon.

Once Lebanon defeated North Korea 4-1, Vietnam was tied with Lebanon in points, goal difference and goals scored. Due to this, it came down to disciplinary points. Vietnam advanced to the knockout stage by receiving two fewer yellow cards than Lebanon.

Vietnam will play their next match against Jordan on Sunday.