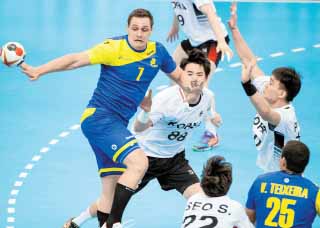 The unified Korean men’s handball team, in white, competes against Brazil during a Group A match at the IHF Men’s World Handball Championship at Mercedes-Benz Arena in Berlin on Thursday. [AFP/YONHAP]

Korea got off to a fairly good start, keeping up with Brazil by tying the score at 5-5 in the first 10 minutes into the match. Shortly after, Korea substituted Kang Jeong-gu, the MVP from fourth group match on Tuesday, into the match, but the continuous errors and poor shot efficiency led the team to fall behind 10-18 in the first half.

By substituting Ri Kyong-song and Jo Tae-hun into the match in the second half, Korea slowly caught up to Brazil and were behind only slightly at 16-17 in the second half. But as the team struggled with its defense, Korea finished with another loss.

Throughout the match, Kang Jeong-gu led the team by scoring five goals.

The unified team started training together in Dec. 22 last year. Although they had a hard time communicating with each other due to differences in the North’s and South’s handball terminology, within less than a month, they showed improvement after each group match.

Korea had an impressive run during their fourth Group A match against sixth-ranked Serbia on Tuesday, though they lost 29-31.

“North Korean players make jokes and are funny,” said Kim Dong-myung. “Since handball is a sport where the players interact with each other a lot, we got close quickly.”

As the unified team failed to advance to the main round Korea will compete in the 21st - 24th place semifinals against Japan in Copenhagen, Denmark tonight. If Korea wins the match, they’ll play in the final for the 21st spot and will compete against the winner between Saudi Arabia and Angola. If Korea losses, they’ll still play another game for the 23rd spot.

Although Korea lost all its Group A matches, they are determined to win against Japan this time. South Korea is ranked 19th in the world ranking while North Korea is not ranked. Japan, ranked 22nd, finished last in Group B with no wins and five losses.

“This game has a bigger meaning because it’s between the North-South unified team and Japan,” said Jung Su-young, captain of the unified team. “Not only in Asia, but we’ll prove that we are stronger than Japan in international tournaments.”

After the round robin, the top three teams from each of the four groups advanced to the main round. The 12 teams will then be divided into two groups of six, and the top two teams from each will move on to the semifinals. South Korea failed to qualify for the past two world championships in 2015 and 2017, and finished 21st in 2013. Since Korea first played at the world championship in 1986, the country has competed 11 times. Korea had its best finish in 1997, coming in eighth.