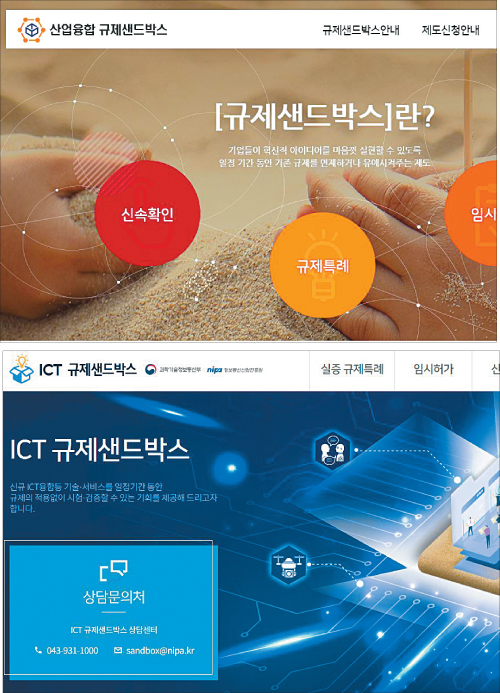 The government began accepting applications for its so-called regulatory sandbox program on Thursday, enabling companies to try out new technologies and services that were previously prohibited or unregulated.

Some 19 start-ups and conglomerates, including KT and Hyundai Motor, applied to the program on the very first day of registration.

Despite the high level of interest, critics are skeptical that the program will succeed.

One feature causing frustration is the fact there are two separate websites handling applications: sandbox.or.kr, which is operated by the Ministry of Science and ICT, and sandbox.kiat.or.kr, overseen by the Ministry of Trade, Industry and Energy.

Applicants have to decide whether their services are better described as ICT or non-ICT and apply to just one. Depending on the website they choose, applications will be assessed by different committees. Local government authorities also accept sandbox applications, adding to the confusion.

“It’s not like a company’s service is bound to regulations from a single government department, so I can’t understand why there are several ways to submit an application,” said a spokesperson of an electric vehicle start-up.

Complicating the process even more, there are three different kinds of application procedures to choose from when applying.

In the simplest procedure, companies ask the government whether their proposed service conflicts with existing regulations and are guaranteed a reply within 30 days. If they get a green light, they may immediately launch services in the market.

If a company knows there are regulations banning its services or existing regulations are vague, it can apply for either a regulatory exemption or temporary permission. These two procedures take longer - up to 90 days - and involve numerous steps including deliberation by special committees.

If applications are approved, companies can launch their services for two years without limitations. The government during that time may review relevant laws and consider revising them.

Some worry that it is highly unlikely that committees will approve services in the last two categories, especially if the government has outright banned them before.

“It’s questionable whether the sandbox committees will make a different decision regarding services that the government hasn’t been able to come to an agreement on,” said a CEO of one financial technology start-up.

“I will be watching for how other companies fare in the application process and decide whether to apply to the program myself,” he continued.

Even if Hyundai gets approval, all relevant laws will need to be revised in order for the company to be able to provide the services long term.

Among other applicants, KT and Kakao Pay applied to be allowed to send notices from public institutions like the National Pension Service via text message and messaging apps as opposed to mailing paper documents, which is the only method currently allowed. Start-up Moin applied to use blockchain technology to facilitate overseas remittances, something the government has been reluctant to allow for the past two to three years.

President Moon Jae-in encouraged people to participate in the sandbox program on Thursday via a Facebook post.

“I hope [the sandbox program] will offer a happy start for all who could not realize their dreams due to regulations,” he wrote. “I expect them to take out all the innovations that they’ve been storing away.”