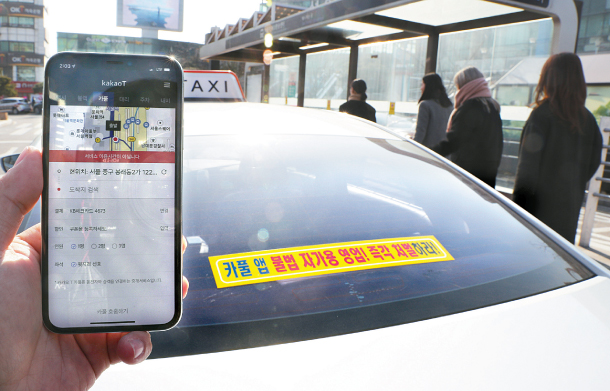 Kakao’s carpool app shows it’s out of service while a taxi awaits passengers in front of Seoul Station in central Seoul on Friday. [NEWS1]

The decision was made the same day Kakao halted test operations of its carpool service. On Tuesday, the IT company announced it would stop offering its carpool beta service to try to bring representatives of the local taxi industry to the negotiating table.

Previous efforts failed. The taxi industry said it would not engage in any negotiations unless Kakao shut its service down. As promised, four organizations representing the taxi industry held a press conference at 2 p.m. - the exact time Kakao promised to halt its carpool beta service.

“We decided to participate in the joint discussion body aimed at finding an agreement on carpool services,” said a statement released by the four organizations. “[It was] made on top of a resolution that we can no longer neglect the social conflict surrounding our participation.”

On Tuesday, Kakao announced it would halt its service and Democratic Party lawmaker Jeon Hyun-heui, the leader of a government task force on the carpool problem, said she would wait for the taxi industry’s response until this weekend. Jeon welcomed the taxi industry’s decision Friday afternoon and scheduled a meeting for the joint discussion body on Monday or Tuesday.

The taxi industry warned that the discussions could break down at any time.

“If the joint discussions are rooted on the premise to allow carpool services, this opportunity can be wrecked again,” said the statement. “We clearly state that the carpool ‘problem’ should be addressed first.”

It added that the taxi industry would continue its struggle against carpool services, including sit-ins in front of the National Assembly launched last month, a few days after a taxi driver immolated himself. A second taxi driver committed suicide in the same way last week.

The taxi industry was further enraged earlier this week when local media outlets reported an internal document from the Ministry of Transport that contained suggestions of how it should raise questions about the local taxi industry to the media and utilize the public’s negative feelings about cabs in order to enable carpool services. The ministry officially responded that such details were never discussed, but the four taxi organizations have been asking for an official apology and indefinitely postponed the funeral of the second taxi driver that immolated himself.

“Internal considerations of the funeral and future strikes will continue regardless of the joint discussion body until carpool services disappear for good,” the taxi representatives said in a statement. At the press conference, they mentioned plans for a fourth and fifth round of protests and taxi strikes.

The third round took place in Yeouido on Dec. 20, attended by thousands of taxi drivers from all over the country.