This is the first time law enforcement has sought to detain the head of Korea’s judiciary.

The litany of crimes Yang has been charged with largely revolve around his alleged abuse of power as chief justice, like reportedly ordering his subordinates to tamper with ongoing trials sometimes at the behest of the Park Geun-hye administration.

“It is only right that former Chief Justice Yang, as the final decision maker, takes heavy responsibility [for the alleged crimes],” said a spokesman for the Seoul Central District Prosecutors’ Office, which is investigating the case. “Testimonies and documents prove that [Yang] not only received reports from his subordinates regarding the most serious of criminal suspicions, but actively took the initiative on them.” 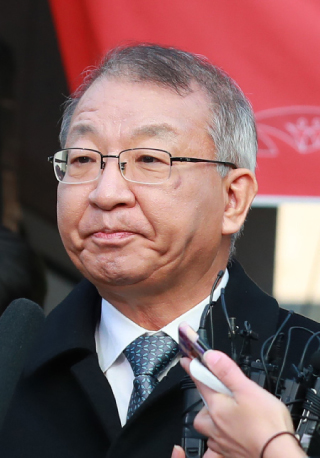 “This is why there must be an arrest warrant,” he said.

Yang, who presided over the country’s top court from 2011 to 2017, has been accused of eroding the judiciary’s independence and the constitutional principal of separation of powers by attempting to use certain politically sensitive trials as bargaining chips with the Blue House.

What he wanted in return, numerous sources attest, was the executive’s support in the establishment of a new appeals court. This could reduce the immense workload of the Supreme Court as well as cement Yang’s own legacy as a successful chief justice.

The most serious allegation against Yang is that he delayed proceedings on two damage suits filed by Korean victims against the Japanese companies that forced them into labor during World War II. This case was held up in the Supreme Court for four years due to the Park administration’s opposition to a ruling that would favor the plaintiffs.

The chief justice is believed to have directed his deputies at the National Court Administration (NCA) - the administrative arm of the judiciary - to meet with the administration’s top officials like Foreign Minister Yun Byung-se or Presidential Chief of Staff Kim Ki-choon to discuss delaying the trials. President Park apparently opposed the trials due to the negative repercussions they could have on diplomatic relations with Japan.

Prosecutors say that Yang influenced a number of other politically salient trials like that of Won Sei-hoon, a former National Intelligence Service director who was sentenced to three years in prison for using the spy agency to meddle in the 2012 presidential election.

Prosecutors, believing Yang may try to eliminate evidence against him, have filed a warrant request with the Seoul Central District Court, which may rule on the matter as early as next Monday. But given that the court has denied arrest warrants for two of Yang’s top deputies in the Supreme Court, analysts say it is likely that the court will deny the warrant in an attempt to shield its former boss.