The rapid increase of the minimum wage is one of the most controversial policies in recent years. It is also frustratingly complicated, leading to as much confusion as consternation. The increases are straightforward. But the implementation has raised knotty questions about precise calculations.

Here, we try to make sense of it all: 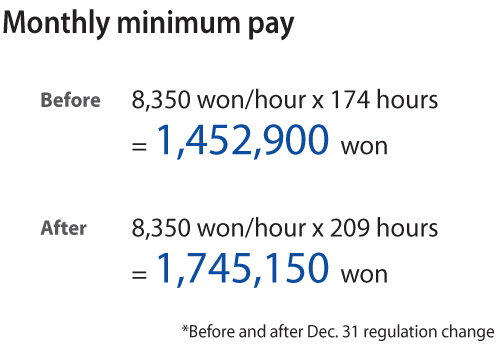 Q. So, the minimum wage was just increased again. Tell me about it.

The rise is the primary initiative of the government’s income-led growth policy: increase wages, drive consumption and boost growth.

In Korea, minimum wage applies to almost everyone, including salaried workers, except for employees of family companies living under the same roof.

But that’s not all.

By law, workers are deemed to have a company holiday, typically Sunday, and they are paid for the time that day, given what is known as statutory-leisure pay. They are paid for 48 hours a week even if they are on the job for 40 hours.

Only those working fewer than 15 hours a week are exempt from this pay.

Existing law required that Sundays be paid - it’s been on the books for 60 years - but because so many small companies were ignoring the law, the government decided late last year to pass a regulation reminding employers of the requirement and including these leisure days when calculating the minimum wage.

Someone being paid at or just above minimum wage for every hour they actually work could be under the legal minimum after the extra day is factored in. They would have to get a raise.

That’s another 20 percent on top of the 29 percent in increases so far.

Q. O.K., so it’s a matter of adding eight more hours a week to the denominator for some. But there’s more, right?

Many companies go beyond the statutory minimum and give two days of leisure hours, throwing in an additional notional holiday on Saturday. These are known as contracted-leisure hours. In some cases, labor and management agree to additional holidays, such as founders’ days.

The Korea Economic Research Institute (KERI), under business lobbying group the Federation of Korean Industries, notes that all the companies with more than the statutory minimum number of leisure days have unions.

Q. In real terms, what does the minimum wage rise mean?

Smaller companies seem to have been hit hard. According to a survey last year by Kbiz, a small- and medium-sized business lobbying group, 57.5 percent of respondents said they were in crisis due to rising labor costs as a result of the minimum-wage rise. A Jan. 14 survey by Saramin, a job portal, found that 78.6 percent of small- and medium-sized companies felt pressure from the wage rise.

Some small businesses are trying to deal with the leisure issue by hiring part-time workers and employing them fewer than 15 hours a week. Some bosses have let workers go and simply picked up extra duty themselves as they don’t have to pay themselves minimum wage.

Restaurants and other smaller establishments, often run as sole proprietorships, have been hit hard, and many have closed or are considering shutting their doors. In 2018, the restaurant and bar index, which has been compiled since 2010, fell the most ever, 2 percent, after a 1.9-percent drop in 2017.

Shops are closing at the fastest rate in years.

Some research has suggested that workers are actually worse off because of the minimum wage increase. While they are earning more per hour, they are getting fewer hours of work and some people are losing their jobs.

Overall, the economy is doing poorly, and the minimum wage increase is often cited. The unemployment rate hit a 17-year high last year and the country added only 97,000 jobs in 2018, the lowest increase since 2009. The GDP growth rate has been disappointing as well. The Korea Development Institute is forecasting 2.7 percent growth in 2018, from an earlier forecast of 2.9 percent, and 2.6 percent in 2019.

But remember, the rise in the minimum wage has come in the context of other headwinds, such as troubles with China, a trade war brewing with the United States and general global uncertainties. There’s a lot of noise in the statistics.

Q. What does it mean for large Korean companies? Surely this is not really a practical concern for them.

The new math has already claimed some victims.

Hyundai Mobis, which pays new recruits salaries of around 50 million won, was recently ordered by the Ministry of Employment and Labor to fix its wage structure. It was found that the company was paying these employees less than the minimum wage under the government’s new calculation method, though this was in part was because so much compensation is in the form of bonuses.

The Korea Automobiles Manufacturers Association said on Dec. 27 that the regulation will increase labor costs annually by 700 billion won for the local car industry.

It is possible that the higher costs will result in higher prices, layoffs and lower earnings. But the real, overall impact is just not known.

In the case of Hyundai Motor, in a similar situation as affiliate Hyundai Mobis, the company is suggesting that bonus pay be paid more often and included when calculating the hourly wage, but the union is reportedly holding the line and insisting that all additional payments be kept out of the calculation. It just wants the company to raise salaries to make up the difference.

To a great extent, the arguments have been posturing. Unions want to paint a dire picture while the corporations want to show that the workers are actually taking home pay far more than the minimum. After all, everything beyond the statutory leisure hours - Sunday, that is - is really a private-sector issue between management and the workers.

Q. What else is in the mix?

In March 2018, the government limited the workweek to 52 hours, from the previous 68. This has also had an impact on employers and workers. Fewer hours can mean less pay, but it also creates staffing and continuity issues for companies.

Small- and medium-sized companies focused on research and development have been especially hard hit. Much of their work is concentrated during certain periods of the year. During these times, productive employees have to be sent home after they hit the hourly limit regardless of what that would mean for a project.

Restaurants, already struggling, have found that the shorter workweek takes a heavy toll on their businesses. Fewer people are working late and company dinners are becoming a thing of the past.

Q. Surely, the higher minimum wage has yielded some positive effects. Are we seeing any benefits as some people earn more?

However, households in the lowest 40 percent income category, most affected by the minimum wage rise, experienced a decline in income over the period, while those in the top 40 percent experienced a rise.

Q. What are the government’s options at this point? It has changed its tone, but will it back off from its commitment to the minimum wage?

President Moon Jae-in conceded last year that he will not be able to keep to his promise of an hourly minimum wage of 10,000 won by 2020. The rate of increase will no doubt fall.

But the retreat is coming in a roundabout way. The method of determining the minimum wage is being changed, allowing for more voices in the decision. This will allow for a slower rise through consensus.