Kakao customer service will be with you ... immediately

Kakao customer service will be with you ... immediately 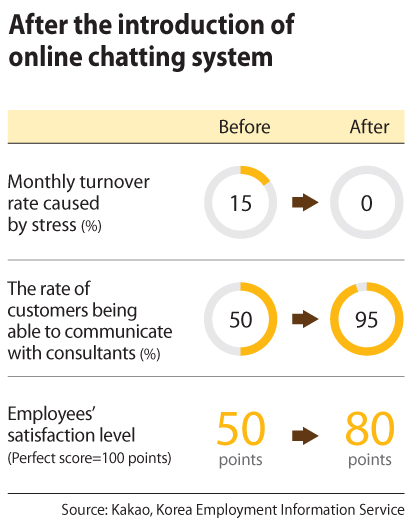 The clickety-clacking of keyboards was about all that could be heard at Kakao’s customer service center in Yongsan District, central Seoul, on Thursday.

Although there were roughly 200 customer service employees at the location, no phones were ringing and few people were speaking, which is odd for an office committed to answering customer questions.

“I have been consulting with customers for 19 years,” said Park Eun-young, a 44-year-old head of Kakao’s call center. “But this is the quietest and most comfortable workplace I’ve ever experienced.”

Since October last year, Kakao has gone from answering voice calls to chatting online to interact with customers. The main goal is to reduce the number of call-center employees. The change was also made to improve customer satisfaction.

Kakao gets about 12,000 inquiries a day. Of these, 500 are still handled by telephone. The other 95.8 percent of inquiries are handled via messaging.

Customers communicate either with a chatbot, a robot that utilizes artificial intelligence, or with a human consultant via KakaoTalk.

The small number of voice calls is usually reserved for urgent or sensitive matters, such as customers with IDs stolen.

Chatbots handle about 6,000 of the inquiries, and the consultants handle the rest.

Although some financial companies have used chatbots at their customer service centers, Kakao is the only company where mobile messenger consulting is predominantly used and voice consulting is rarely used.

Kakao decided to change its customer service from voice calls to online massaging largely due to stress on both the customers and employees as well as changing social trends.

Many times, customers were frustrated because they had to wait a long time for a call-center employee, busy on another line, to pick up.

The service center would get overwhelmed when daily calls exceeded 10,000 and only half of calls got through.

Many of the employees were stressed out. Additionally, younger people today prefer communicating via messaging app.

It has been four months since the mobile messenger developer adopted the new customer service model, and the results are showing.

The consultants are able to control their emotions as they are no longer exposed directly to the frustration of customers on the other end of the line. As such, employee stress levels have gone down. This is evident in the zero turnover. Before the change was made the average turnover rate of the service center employees was 15 percent a month. But currently, other than employees quitting their jobs for getting back to school after break or getting into colleges, the turnover rate has dropped to zero percent.

In Kakao’s in-house survey of its service center employees, the satisfaction level was at 50 percent before the changes were made. The recent poll showed it has risen to 80 percent.

The consultants can now attend to three to four customers simultaneously by having three to four messenger windows opened. As a result, the rate of connecting with customers has gone up from 50 percent to 95 percent.

The average waiting time is now less than one minute.

Consultants can send a video or an online link related to the inquiry. This system also suits people in other time zones and people with disabilities who have trouble making calls.

Those with call phobia can make contact without any fear as well.

As the pros of the new system have become widely known, other companies are rushing to benchmark Kakao’s customer service.

“After revamping the Kakao customer service center, we are reaping results beyond our expectations,” said Lee Joon-mok, head of Kakao’s user protection team. “We will focus on stabilizing and improving the service.”

Although voice calls only account for 4 percent of total inquires, Kakao said it will continue to provide voice-call service for senior customers who have difficulty with online texting customer service.